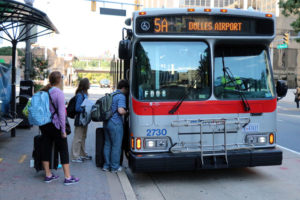 With Metro’s Silver Line soon to open, WMATA is considering eliminating a Metrobus route that stops in Rosslyn on the way to Dulles International Airport.

The agency held a public hearing this week on changes to dozens of bus routes, during which it presented three options for the future of the 5A route: eliminating it completely, only running it between Dulles and the Wiehle-Reston East Metro stop (the end of the Silver Line when it opens in early 2014), or only running it before and after Metrorail’s hours.

Rob Stern, an Arlington-based vacation planner, spoke out against the proposed changes to bus service at the public hearing Tuesday night.

“Metrobus 5A provides fast, affordable transportation for local residents, visitors, students, airport employees and commuters,” he said in an email. “Alternatives like the Washington Flyer and the Fairfax Connector would require a change and paying an additional fare, as well as taking more travel time. This is a burden for those with heavy baggage, and in bad weather. Taxi service from the airport can cost $60, 10 times more than the 5A’s $6 one-way fare.”

“The heavy use of both the Orange line and Silver line rail service at evening rush hour would make the rail option difficult for many travelers, as Dulles Airport’s peak travel time is in the evenings,” he continued. “As a travel agent I mentioned that many of my clients choose the airport to fly from based on ease of access, and while Washington National Airport has direct rail service, and BWI Airport has both Marc Train and Express Metro Bus Service, on the B30, this change would put Dulles Airport at a competitive disadvantage. ”

Those interested in giving input to WMATA’s community outreach can fill out a survey by Tuesday, Sept. 24 at 5:00 p.m. After the public comment period closes, the WMATA Board Customer Service and Operations Committee will consider the feedback and proposed changes at their meeting in November, according to WMATA spokeswoman Morgan Dye.

If any of the options are approved, they would go into affect soon after the Silver Line opens, which is expected January or early February 2014. Phase 2 of the Dulles Corridor Metro Rail Project, which will extend the Silver Line to the airport and beyond, is not expected to be completed until July 2018.

The changes to the 5A route were first proposed by the District Department of Transportation.