A man who broke into a Courthouse apartment and rubbed a sleeping woman’s arm had struck twice before in the same apartment building, ARLnow.com has learned.

On Sunday, Sept. 15, six days before the arm-rubbing incident, police say the same suspect broke into two apartments and stared at women while they slept. Both break-ins took place between 4:00 and 5:00 a.m., and ended with the suspect — who was wearing a yellow polo shirt and khakis — fleeing the apartment after the women woke up, according to police.

In the first instance, the man said “oops, wrong room,” after the woman, who was sleeping in a bed with her boyfriend, awoke. In the second instance, the suspect fled after the victim woke up, saw the man staring and her and began screaming.

The second victim, who did not want her name used in this article, contacted ARLnow.com and shared her story.

“Around 4:45 a.m. [on] Sept 15, I woke up to find a man standing at the foot of my bed staring at me,” she wrote. “He did not say anything to me. I screamed from my bed (as where he was standing was blocking my bedroom door) for about 30-45 seconds… before he slowly backed out of my bedroom and ran out of my apartment.”

“I did not hear him open the door to my apartment, so I waited about about 45 seconds and ran out of my apartment, into the lobby and called 911,” the woman continued. “The police came right away and searched my apartment, but the intruder had left.” 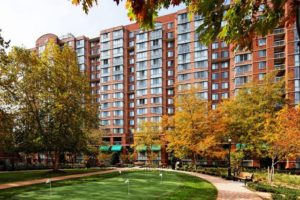 Six days later, the man broke into another apartment and began rubbing a sleeping woman’s arm, before she woke up and he fled the scene. During that incident, the man was wearing a red polo shirt and blue jeans.

The break-ins all took place at the Meridian apartment complex at 1401 N. Taft Street.

The suspect is described as a 5’10” to 6′ white or Asian male, between the ages of 20 and 25. In each of the three cases, police say, the victims were white women in their 20s who live with roommates.

It’s unclear how the man is choosing his victims, or how he has managed to gain entry to the apartments. Apartment doors in the building lock automatically, though it’s possible that the victims’ doors were accidentally left partially open. Today, building management posted a flyer online encouraging residents to lock the dead bolt on their doors.

Police are working the case in hopes of finding the suspect before he possibly escalates his crime.

“We’re actively investigating and working with the victims,” said Arlington County Police spokesman Dustin Sternbeck. “It’s a good reminder to make sure people are locking their doors at night, and if they are a victim of a crime, contact police immediately.”

Sternbeck noted that the suspect description fits that of many residents of the apartment complex, making the investigation more difficult.