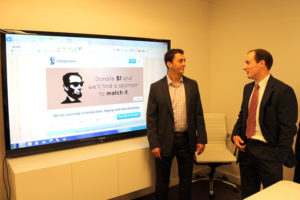 When Zack Liscio, the CEO and co-founder of Changecause, moved from his job at Google in July to work in Arlington full-time and help his startup get off the ground, his friends and coworkers in Silicon Valley were confused.

“Everyone assumes that San Francisco is a more fertile group for startups,” he said. “I don’t think that’s true. It’s such a dense marketplace that it’s really hard to stand out. Plus, in the D.C. area, the talent and access to capital and mentors blows that out of the water.”

Liscio, as well as co-founder and COO Edward Ridgely, knew something about Washington, D.C.-based startups before they launched Changecause; they met at perhaps D.C.’s most successful tech startup, LivingSocial. When Ridgely and Liscio met at LivingSocial, they shared with each other their passion for helping nonprofits and donating to charities.

Incorporated last November, Changecause was a side job for Liscio, Ridgely, Chief Technology Officer Michael Seid and Chief Strategy Officer Patrick Costello. They initially set out to build an app designed to be a mobile wallet, where users could pay for goods on their smartphones. After seeing the small fees from each transaction and realizing how much money, on a grand scale, that could add up to, Liscio and Ridgely adjusted course. 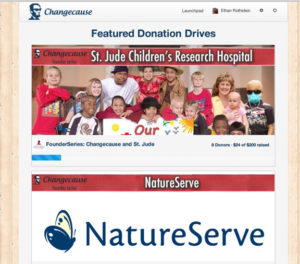 “There was such an emphasis on local commerce at LivingSocial,” Ridgely said. “So I started thinking what was the way I could give back.”

Eventually, they landed on the idea that would become Changecause. Users can donate small amounts — typically between $1 and $5 — to a charity of their choice, and brands looking to increase awareness of both themselves and their philanthropy will match the donation.

“Donating to charity can be as effective as advertising for a brand,” Liscio said. “The reasons why brands like Toms are so big is because of cause branding and social responsibility.”

To add to the appeal to brands, Changecause will pair brands with donors whose demographics match a particular brand’s target market; if a 27-year-old donates to charity and lists running as its interest, a brand like Nike would match that donation. 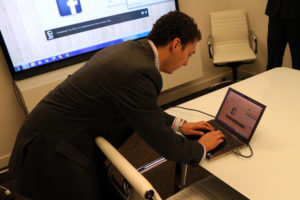 Changecause is one of 10 semifinalists in the Launchpad Challenge, where startups compete for the chance to pitch Wizards and Capitals owner Ted Leonsis on their company. Once Changecause was accepted as a challenger, the four co-founders, along with principal software engineer Mark Pierotti, the company took off.

Changecause’s web platform launched in beta version last month. Commonwealth Joe, a coffee subscription service, was the first brand partner to sign up, with a charity-matching drive for the Arlington Free Clinic. Five other nonprofits have signed on and Changecause is in discussions to bring on more partners.

As for how the bootstrapped firm will begin to make money, each transaction will by “dynamically priced” to the matching company.

“We have not tried to raise outside funding yet, but we’ve built a cash-flow positive business model,” Liscio said. “A lot of companies build their company and then they try to figure out how to make a profit. That’s a dangerous business model.”

Next month, Changecause will be coordinating donations for Slice Out Hunger, an annual charity even in New York City where 37 different pizzeries donate thousands of pizzas and visitors purchase tickets, matched by the event’s sponsors, and the proceeds go to the Food Bank for New York City. The event will give Liscio and his co-founders a chance for major brand exposure, but a question still remains: why would a major brand pay money to donate to charity?

“We think every brand has one cause they naturally align with,” Liscio said. “Last year, the top companies in the country gave almost $20 billion to charity, but they aren’t doing it in a visible way. With us, the brands and the causes will get exposure they need.”