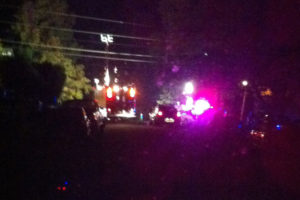 Police are investigating a possible drive-by shooting in the Nauck neighborhood.

The incident took place this evening (Friday) on the 2400 block of S. Oxford Street.

So far, police are not confirming any details about the incident; it’s unclear if anyone was injured. Police are on the lookout for a vehicle connected to the incident.

Update on 10/7/13 — Police have not responded to multiple calls from ARLnow.com, but the department released the following about the incident today (Monday).

SHOOTING, 10/04/13, 2400 block of S. Oxford Street. At 9:15 pm on October 4, a 32 year-old male victim sustained a single gunshot wound to his abdomen outside of his residence. He was transported to Fairfax Hospital with non life threatening injuries. The two suspects were described as black males in their 20’s. They fled the scene in an unknown make and model vehicle that was driven by a third subject. The investigation is ongoing.