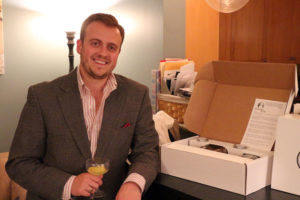 Ask what the average person thinks when they hear the words “homemade gin,” their mind will probably go to bootleggers and bathtubs.

Arlington resident Joe Maiellano’s mind, however, goes to high-quality juniper berries and botanicals, a strainer and a funnel.

Maiellano founded The HomeMade Gin Kit with his wife, Sarah, and friends Jack and Molly Hubbard last November. The company pre-packages the instruments and ingredients needed to make gin — minus one critical component: vodka — and ships them across the country for $49.95 a box.

Like many startups, the Maiellanos and Hubbards didn’t come together with the idea of shipping out do-it-yourself gin kits. One day, while drinking gin and tonics made from Maiellano’s homemade recipe, Joe and Jack looked at each other decided they wanted to open a distillery together.

It didn’t take long before their research revealed that opening a distillery costs nearly $1 million before a single bottle of spirit is ever produced. The two full-time D.C. professionals had neither the time nor money for that, and the dream almost died then and there.

“Jack said, ‘the recipe is still good,'” Maiellano said. “That’s when we came up with making the kits.” 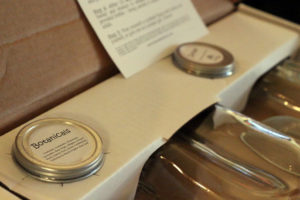 They ordered Italian glass bottles and all the other components to make homemade gin, and spent a month putting together 250 packages, stacking them “floor to ceiling and wall to wall” in the Maiellanos’ den in their apartment near Potomac Yard.

Once they launched last November, the four entrepreneurs were hoping to sell their 250 kits by Father’s Day, Maiellano said. A month later, they had sold more than 2,500.

“We took vacation days from our day jobs, we brought in family and friends,” he said, “and gave them a kit so they would help us.”

Back then, Maiellano was making trips to the FedEx Office downstairs in his apartment building every day to ship orders coming in on their website. Mere months later, HomeMade Gin Kit is contracting with a storage and shipping facility in Dulles, Va., shipping out truckloads of kits to online retailers like Uncommon Goods and RedEnvelope and negotiating deals with major national retailers. 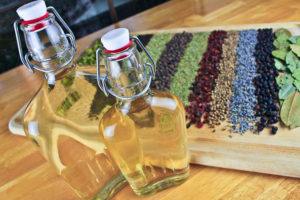 Through it all, Joe and Jack continued their work as fundraisers for D.C. nonprofits, and Sarah and Molly also kept full-time jobs. For The HomeMade Gin Kit team, the project is one of passion: although the bootstrapped company is profitable, Joe said, all of the profits are being reinvested back into the business for now.

In addition to the kit, HomeMade Gin Kit sells refills of the botanicals and juniper berries for $10 apiece. Maiellano recently perfected a Christmas-themed gin — with a flavor reminiscent of a Christmas tree — that the company will sell. It’s the first step toward expanding HomeMade Gin Kit’s product line.

Maiellano wants to build kits for different spirits, as well. His passion for Absinthe led him to try several different recipes, but he couldn’t find one that wasn’t horribly bitter, he said. A spirits perfectionist, he said it took him 12 different tries to finalize the gin recipe he and his co-founders built the business upon.

“I think it’s the best gin-and-tonic gin there is,” he said. “Not all of my friends are big drinkers, but pretty much everyone I get to try it likes it.”

Different flavors of gin and new homemade spirit kits may be next on the to-do list for the Maiellanos and Hubbards, but there is still one dream left to chase.

“We would still love for this to lead to opening a distillery,” Maiellano said. “Craft distilling is where craft brewing was in the 1980s. We’re hoping to get in on the ground floor of that.”