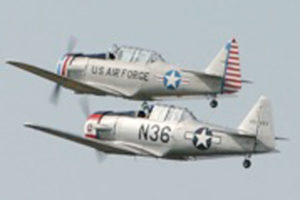 More than 30 airplanes built for World War II will conduct a large-formation flyover of the Pentagon and Arlington National Cemetery Friday afternoon.

Friday’s ceremony will celebrate the “North American Texan” plane’s 75th anniversary. Friday afternoon at approximately 12:30 p.m., the planes will reach Arlington by way of a flight path that follows the Potomac River, according to the North American Trainer Association, which is coordinating the event.

More than 15,000 Texans were built between 1938 and 1947, according to the NATA, and more than 400 of them are privately owned and still in flight. They were the most popular plane used in American fighter-pilot training in the 1940s and 1950s.

The formation is expected to be visible from much of Arlington and Alexandria. The forecast for Friday as of Tuesday afternoon is a 60 percent chance of showers.