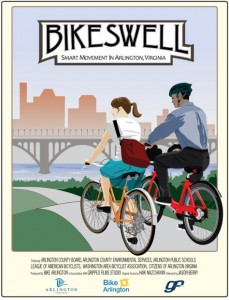 A county-funded documentary chronicling Arlington’s transformation into a more bike-friendly community is premiering Thursday night at the Arlington Cinema and Drafthouse (2903 Columbia Pike).

The 30-minute film, titled BikeSwell, followed county staff and members of the community for more than a year while the county was adding bicycle-related amenities like Capital Bikeshare and bike lanes in streets. Gripped Films, a film company founded by Arlington resident Jason Berry, produced BikeSwell on a $30,000 county budget.

“It’s a case study on some of the things that can be done, how it’s done, and how it’s going in Arlington,” said Chris Eatough, program manager for Bike Arlington, who was part of making the film. “We asked a lot of different people from a lot of different areas of life what they think of biking. Part of it is talking to people who drive and don’t bike.”

Included in the documentary will be a discussion of staff processes for creating bike lanes, and a look at work by biking advocates in meetings and boardrooms, Eatough said.

The premiere will be held from 7:00 to 9:00 p.m. Thursday night. Tickets were available to the public earlier this week but have since sold out. Following the movie, there will be a panel discussion, moderated by Eatough, featuring Berry, Arlington Bicycle Advisory Committee chairman Jakob Wolf-Barnett and others.

Eatough stressed that the documentary will not simply be pro-bicycle propaganda. However, in interviewing drivers, as well as representatives from AAA, the filmmakers found very little pushback, he said.

“Interestingly enough, the opposition was hard to find, even with drivers,” Eatough said. “We thought we’d be shooting fish in a barrel asking drivers stopped at intersections. There were a lot of comments that they just need their own space, they need their own area on the roads.”

The film will be available on YouTube Friday, Eatough said, and Arlington hopes to be able to send it to communities across the country to educate them about transitioning into a more bike-friendly area.