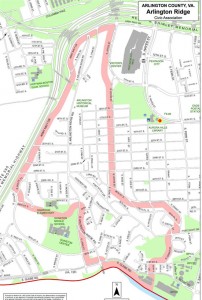 The Arlington Ridge Civic Association is requesting the Arlington County Board institute a “zoning freeze” in its neighborhood.

ARCA is proposing an update to its Neighborhood Conservation Plan, its first since 1973, which the Board could approve during Saturday’s meeting. The civic association said the zoning freeze request is being made in light of the 22202 zip code’s 37.5 percent population increase between 2000 and 2010.

In its request to the county, submitted this spring, ARCA asks the County Board “to ‘freeze’ zoning within and outside the ARCA area until the full impact of present development plans in areas adjacent to us can be fully assessed in order ultimately to conserve the peaceful single-family character of our neighborhood and protect our quality of life and the air we breathe.”

County staff recommends the neighborhood plan be accepted by the Board, but with notes from county staff essentially denying the proposed halt to zoning. Helen Duong, spokeswoman for Arlington’s Department of Community Planning, Housing and Development, said there are no zoning freezes in place in Arlington, “nor have there ever been.”

“A neighborhood’s request for a zoning freeze is not a typical recommendation in Arlington County,” Duong told ARLnow.com. “More often we see communities asking that the County adhere to the General Land Use Plan and zoning plans and to not consider making changes without going through an inclusive neighborhood process.”

The neighborhood plan does not become codified upon its acceptance by the Board. Instead, the plan consists of recommendations which are then to be implemented by county staff, provided they are consistent with county policy.

There were several other recommendations in the plan that county staff expressed concern about, in terms of implementation, including:

The speed cameras would require authorization from the state legislature, and ARCA requests that the county lobby the legislature for that permission.

Other neighborhood priorities identified by ARCA include maintaining its nine public parks, improving sidewalks and streetlights, “proactively limiting and managing traffic,” and designating Aurora Hills Library and Community Center the neighborhood’s “cultural hub,” despite the fact that the facility is in adjacent Aurora Highlands.