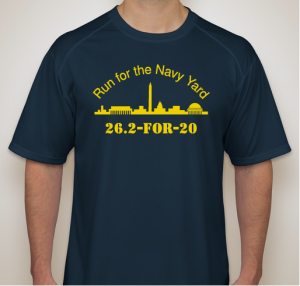 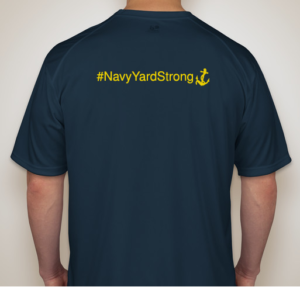 An Arlington couple is selling t-shirts they came up with as a way to raise money for those impacted by last month’s Navy Yard shooting.

Chris and Jennifer K. (they prefer not to reveal their full last name) had been trying to find a way to help those affected by the incident at the Navy Yard, where Jennifer works. Jennifer remembered a “Boston Strong” t-shirt she bought following the Boston Marathon bombings earlier this year. The couple figured something similar might work for the Navy Yard shooting, because Chris was already planning to run next month’s marathon in Athens, Greece. The “Run for the Navy Yard, 26.2-for-20” theme honors the 20 victims killed or wounded at the Navy Yard.

“We just thought this would be a great way to raise funds and help keep the victims’ memories alive through wearing the shirts,” said Chris.

Jennifer had been working on the third floor of building 197 when the shooting took place. She had been near an emergency exit and managed to escape to safety. Chris explained that his mother-in-law works just down the hall from Jennifer, but luckily had been on vacation that day. His mother-in-law’s office ended up being used as a shelter where employees barricaded themselves inside.

Chris said the family is incredibly thankful for Jennifer’s safety, and now the focus has turned to helping the families of those who weren’t so lucky.

The money raised by the t-shirt sales goes to the Navy Yard Relief Fund. The couple already completed one round of fundraising, during which they sold 95 shirts. They recently launched a second round that runs through October 29. Although the fundraising websites Chris used required him to list a specific amount of money as an end goal, he and Jennifer don’t really have a set amount they’re aiming for. They just want to help out as much as they can.

“It’s just to really raise as much money as we can for the families and people who are really affected by it,” he said. “Any support people can give by buying the shirt or spreading the word is greatly appreciated.”

Anyone who wishes to buy one of the $25 shirts may do so online. The shirts will ship around two weeks after the fundraiser ends on October 29.