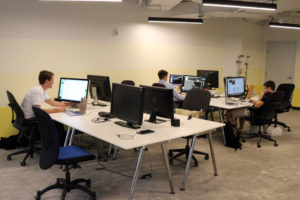 Chris Cummings was already the CEO of a media company with a language translation website, SpanishDict.com, that was drawing 5 million unique page views a month in 2011 when he graduated from law and business school.

His bootstrapped company consisted only of him and one other employee when he moved to Arlington and decided to poll his visitors, asking, “how many of you are learning Spanish right now?”

With more than 6,500 answers to the survey, 77 percent said they were learning Spanish while using SpanishDict. Cummings, no longer running the site during evenings and weekends, decided to dive into teaching Spanish, not just translating it.

Last month, Cummings and his company, Curiosity Media, launched Fluencia, a Spanish learning program that Cummings says is more modern and data-driven than any that have come before it. 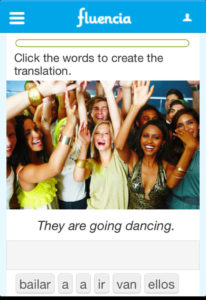 “I’ve always felt we could do a much better job with foreign language education,” Cummings said. “People were not happy with the options out there. Most of them were too boring, too expensive or just didn’t work.”

Now based in The Ground Floor in Rosslyn, Fluencia was primarily built starting in 2012 in a small office above Spider Kelly’s in Clarendon. Cummings said working late on Thursday and Friday nights was “not an option” with the loud music blaring from below, but that didn’t prevent him and his team from building the program, which runs on desktop, tablets and smartphones.

What separates Fluencia from more established programs like Rosetta Stone, Cummings said, is that it’s constantly collecting data on user experience, figuring out what the user is learning and struggling with, and adapting lesson plans accordingly.

“The tools people use to learn are really antiquated,” Cummings said. “The tools we use are so interactive. We stay at your pace, we have native speaker audio, and we collect data on what you’ve learned and bring it right back to you.” 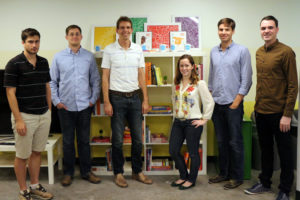 Cummings says he is “conversational” in Spanish, and but he has brought in Spanish professors from Georgetown University, George Washington University and American University to test the effectiveness of the program. Fluencia only teaches Spanish to English speakers right now, but it is “built to be flexible,” and Cummings plans on adding new languages in the future.

“A lot of language programs that teach every language are jacks of all trades and masters of none,” he said. “Our focus on Spanish helps us improve.”

The program’s biggest innovation, Cummings said, is a rating system learners can use after every lesson. They rate the lesson on a scale of 1-5, and the Curiosity tech team can use those ratings to improve it in the future. Contrary to his initial belief, Cummings said the highest-rated lessons were taught mostly in Spanish and have more challenging interactions. 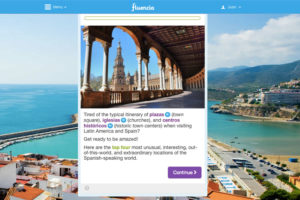 “We were nervous beforehand about the grammar, but those lessons have among the highest ratings,” Cummings said. “It’s amazing how ratings are so influential to us for things like restaurants and online shopping, but we never use them for the way we learn.”

Cummings told a story of a fifth-grader learning Spanish as an example of Fluencia’s capability. This summer, between fifth and sixth grade, the student used Fluencia a few hours a week, having never learned a word of Spanish before that. After the summer, he took a placement test with Arlington Public Schools and was placed in the same class as students his age who had taken Spanish through kindergarten.

“Our surveys keep coming back with answers that users say it’s the best product online they’ve tried, which is super encouraging,” Cummings said. “We’ve been working in a small sphere, but now we’re getting more people using the product. We’ve got an initial foothold. It’s more than an idea. It’s out there.”

After a month, Fluencia is up to 30,000 users from 180 countries, Cummings said. They have already collectively answered more than 1 million questions, and that data is being culled and used to improve the program. The service costs $7.95 a month for a year’s subscription, $6.95/month for two years and $14.95 for a monthly subscription.

Curiosity Media is also hiring in engineering and design positions.