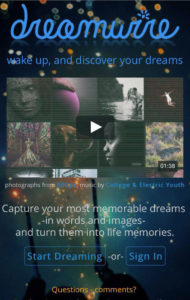 Omar Hijaz is about as atypical as any tech startup founder could possibly be.

Hijaz started his product, Dreamwire, after he had a dream about a social network for people to instantly write down and share their dreams. He said he did research and found that there wasn’t an app or program out there for that, so he decided to build it himself. There was only one problem.

Hijaz didn’t know how to write a line of code.

Hijaz, a patent engineer with the U.S. Patent and Trademark Office in Alexandria, spent the next six months of his free time, starting in January 2012, listening to lectures and reading every book he could on coding, then three months building Dreamwire before its first iteration launched last fall.

“Up until then it was a big secret,” Hijaz said. “I didn’t want anyone to steal it. That’s when I realized I didn’t know what I was doing, because I hadn’t talked to anyone about it. People really didn’t like it.” 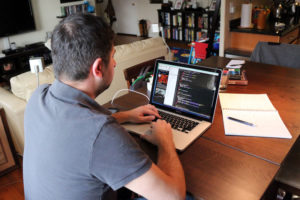 The site was built how Hijaz had dreamt it: users could like each other’s dreams, comment on them and share dreams to different networks. But Hijaz had never taken a design course in his life, and he didn’t anticipate that maybe other people didn’t want everyone to know their dreams.

“Dreams are a really personal thing,” Hijaz said. “What I find out is people want to own their dreams. They don’t necessarily want to share them.”

So the patent examiner went back to the drawing board, taking classes with Design Alexandria — which he has since taken over — beta testing to get feedback, and bringing in some outside help to shape the website. Version 2.0 launched last month, and it’s a much more simplistic, streamlined product. 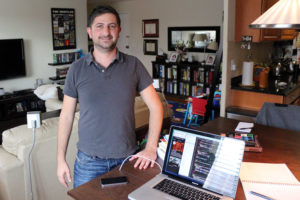 Users now can head to Dreamwire and record what they dreamt as soon as they wake up, with a description of the dream and associate an image from 500px, plus describe the dream as nightmare, lucid, recurring or fragmented, plus add the emotion felt upon waking up.

Hijaz knows that very few, if any, users will record a dream every morning. Dreamwire is intended primarily for the dreams that inspire people; like the one that led to Dreamwire’s creation.

“We dream every night,” he said. “Sometimes it’s a good or bad dream, sometimes you wake up from a really amazing dream, and we try to let people capture that feeling. Once you start recording these awesome dreams, it’s going to inspire your life.” 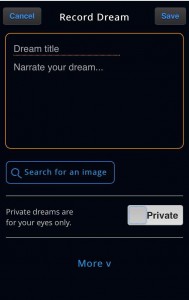 Hijaz gets home from his day job and works on Dreamwire about “three to four hours, every night,” he said. He is the captain and crew of the company, which is completely bootstrapped. but he said he wants more time to continue to improve the product before he seeks any funding.

In his research for building Dreamwire, the entrepreneur found himself reading almost as much from famous dream researchers like Carl Jung. He reached out to several dream researchers for guidance while building the product, but was a little disappointed with the response.

He acknowledged that university professors also conducting research are exceedingly busy, but remarked “a lot of them are not tech-savvy.”

“You have to really beat it into them that this a powerful tool,” Hijaz said.

He sees the potential for research; after all, if Dreamwire gains traction, it will be perhaps the largest data mine of dreams in the world.

“I think it could be a huge tool, but I’m not really sure how,” Hijaz said. “Everyone dreams differently and would use this differently. I don’t think anyone would know how this would be used.”

The next step for Dreamwire is an app for iPhones and iPads. While he was being interviewed, a large book on programming for iOS (Apple’s mobile operating system) was sitting on the table. He’s also toying with the idea of commenting on public dreams; all dreams are private by default, but users can choose to share them with the rest of the Dreamwire community.

Eventually, Hijaz would like to make Dreamwire his full-time job, but he’s a long way from there. For now, he says he’ll work to expand Dreamwire’s reach and offerings — and continue to dream.