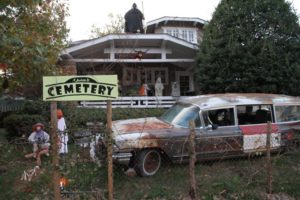 The next few days are your last chance to stock up on candy, because Halloween is this Thursday.

Despite a full slate of Halloween activities last weekend, the actual holiday is this week, meaning coworkers in costumes and, of course, kids trick-or-treating.

As in years past, there’s no official time period for trick-or-treating in Arlington, but parents have traditionally taken their children around the neighborhood just after sundown.

“Moonset” is expected at 4:23 p.m., according to Weather.com, and if it takes too long to change into costume, parents could be caught in the rain thanks to a chance of showers at night.

Arlington officials and local organizations have a number of tips for staying safe Halloween night.

Police advise parents to instruct children to stay in the neighborhoods they know and to refuse any unwrapped candy. When children return home, parents should inspect candy for signs of tampering or foreign objects.  Better yet, police say, parents should head out with their children on Halloween.

“We always recommend that parents accompany children, especially younger children,” said Arlington County Police spokesman Lt. Michael Watson. “We also recommend that children and parents have something that would be visible in the dark, like reflective vests, a flashlight or some sort of glow stick, so they can be seen by drivers.”

If it rains, the following advice from Arlington County, issued last year following Hurricane Sandy, could apply: “Watch out for slip and trip hazards such as wet leaves and small branches on sidewalks and driveways.”

AAA, meanwhile, is advising drivers to use extra caution after 4:00 p.m. on Thursday. There are about four times as many fatal child pedestrian collisions on Halloween compared to other days of the year.

“To prevent this from happening, area motorists need to be especially cautious between the hours of 4 p.m. and midnight, when pedestrians are most vulnerable,” said John B. Townsend II, AAA Mid-Atlantic’s Manager of Public and Government Affairs. “Instead of cruising along hell-for-leather, drivers should slow down in areas with pedestrian traffic and watch for trick-or-treaters who may be crossing mid-block. Most pedestrian fatalities happen in mid-block settings, not in crosswalks.”

The automobile organization also had the following advice for parents of trick-or-treaters.