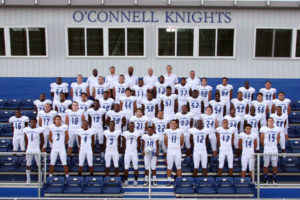 The penultimate week of the regular season for high school football ended how most Friday nights have this year: with Yorktown and Washington-Lee winning.

The Generals (7-2, 6-0) made short work of Wakefield, 56-21, in south Arlington Friday night. Washington-Lee quarterback Sam Appel had perhaps the best game of his career, throwing for 209 yards and five touchdowns. Receiver Trevor McManus was the main beneficiary with eight catches for 102 yards and three of those touchdowns. Running back Daquay Harris kept up his impressive season, and needed just 10 carries to rush for 108 yards and a touchdown.

Wakefield (2-7, 0-6) was led by running back Leon Young, who carried the ball 16 times for 94 yards, including busting free for a 44-yard touchdown in the second quarter. Wakefield’s long season will come to an end this week when they travel to face Mount Vernon on Friday.

Yorktown (8-1, 6-0) was at Mount Vernon Friday and the Patriots pulled out a 31-21 victory to extend their winning streak to seven games. Star running back M.J. Stewart returned from the ankle injury that sidelined him the previous week against Chantilly, rushing 11 times for 121 yards and two touchdowns. The Patriots scored 17 unanswered points in the first half, putting enough distance to hold off Mount Vernon (3-6, 2-4) the rest of the way.

This Friday night at 7:30 at Yorktown will be the regular season finale and a showdown between the Patriots and the Generals. Both teams are 6-0 in the National District, turning the finale into a winner-take-all matchup for the district title.

Bishop O’Connell ended its season on a high note Saturday afternoon, blowing out Bishop McNamara 61-36. The win brought the Knights’ season record to 5-5 and put them in fifth place in the WCAC. Unfortunately for the Knights, four teams make the Catholic league’s playoffs. Marquis Rowe was the star Saturday, scoring on a 98-yard kickoff return, a 36-yard run and two receiving touchdowns. Between quarterbacks Michael Galvan and Jason Ley, the Knights threw just one incomplete pass all game.

A march against drugs drew a large crowd of parents and community members to Wakefield High School, the site of a fatal drug overdose this week. Sergio Flores, a student,…