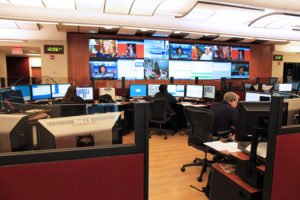 “Arlington 911, where is your emergency?”

A call comes in for a seemingly typical vehicle accident on a seemingly typical morning in Arlington. But for the rattled caller, the situation is anything but typical. Enter Lynne Putnam, Emergency Communications Tech III. Putnam has 30 years of experience as a 911 dispatcher, 27 of those spent in Arlington County. She attempts to soothe the caller while transferring the person, because it turns out the accident did not occur in Arlington’s jurisdiction.

“Stay on the line, ma’am, I’m sending you to Park Police.”

Putnam remains on the line with the caller until she can hear the person speaking with a representative for the U.S. Park Police. As with this case, Putnam frequently must make sense out of a caller’s choppy phrases and gather all the facts she can. Often, callers panic and collecting the necessary information becomes a more daunting task than it may first appear.

“I think the part I like best is I’m able to help people in their time of need,” said Putnam. “I like being the calming voice on the other side helping you through your emergency.”

Adding to the difficulty of call taking is the ECC goal to answer each 911 call within 90 seconds. Although not easy to rapidly collect information and then move on to the next call, it’s the ECC employees’ speedy actions that help maintain Arlington County Fire Department’s four minute average response time. 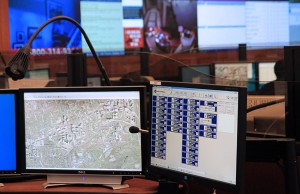 Answering 911 calls is only part of the job for Putnam and her co-workers at Arlington’s Emergency Communications Center in the Courthouse neighborhood; they also train as police and fire dispatchers. Although it takes about 18 months for the average employee to become fully trained in all three disciplines, it allows for more flexibility and employees can help out wherever needed.

Dispatchers are the voices the public hears when listening to scanners. They deal with calls to the non-emergency police line as well as emergencies called in to 911. Based on the information entered into the system by the 911 call takers, dispatchers determine which response units should head to the scene and how many units should respond. They examine which units are closest and call them to the scene via police and fire radios, explain the emergency as best they can and sometimes give directions.

“The mechanics of the job look easy, answering phones and inputting information,” said Emergency Communications Tech III Sheree Rymenams. “But there’s a lot of judgment involved for each call.”

Dispatchers say occasionally their jobs can be “like that telephone game” in that the details or severity of the original call can end up being nothing like what officers actually find on the scene. With the long hours, multi-tasking and intense situations sometimes comes nervousness, despite having cue cards at each cubicle with prompts for what to ask in a wide variety of situations. After all, emergency responders’ and citizens’ lives are on the line.

“You can’t worry constantly. You just have to do what you’re trained to do, what you’re supposed to do,” said Rymenams. “It’s a team effort.” 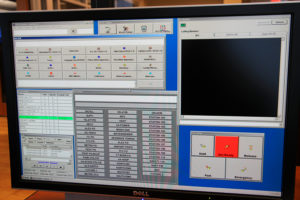 Dispatchers work in pods next to the 911 call takers, and the employees rotate jobs every four hours. In addition to keeping all of the workers’ skills fresh, the rotation prevents burnout.

“It’s never routine. It’s never the same old, same old. Just when you think you’ve heard it all, something else happens,” said Putnam. “It keeps your brain sharp, keeps you on your toes.”

Up to this point, workers have had to endure 12 hour shifts, from 7:00 a.m. to 7:00 p.m. or vice versa. They switch from days to nights mid-week. Employees are looking forward to January, when a new policy will result in six different shifts and a shorter work day. Regulations governing mandatory time off will remain the same: Employees cannot work more than 16 hours at a stretch and must have a minimum of eight hours between shifts.

With so much to remember in such intense situations, the ECC workers say their yearly training is beneficial and important. They have a minimum of 16 hours of training every year, more for supervisors. Employees need additional training for each step they advance and for each additional task they are certified in.

As mentioned in February, Arlington’s ECC has been researching the best ways to integrate new technologies like Next Gen 911, which could allow residents to text for help in emergencies. Not all of the new options are feasible in Arlington, but certain others — such as Twitter monitoring — might be able to be integrated.

“Technology is changing so quickly, we’re just trying to keep up,” Putnam said. “Every time you try something, another new thing takes its place.” 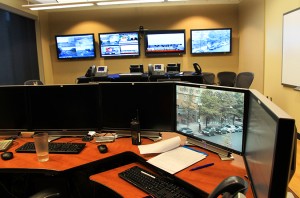 One new feature the ECC team implemented in October is the Watch Desk. A room adjacent to the main 911 call center contains four large screens on the wall and computers where employees can monitor cameras throughout the county. They can access and remotely move the county’s traffic cameras to view incidents that are called in. They also can view VDOT cameras, cameras affixed to county buildings and police cameras.

Workers watching the incidents report anything they see that could aid emergency responders. Sometimes police haven’t made it to the scene yet and could miss crucial information, and other times the ECC employees simply offer a different viewpoint from what teams on the ground can see.

“We can assist the police as another set of eyes,” said Watch Officer Chris Satterfield. “We’re an observe and report type of office. One small thing could be small now, but grow very quickly into something. We just have to make sure everyone knows in advance.”

An example of the new Watch Desk in action occurred during the October 30 scaffolding collapse on Columbia Pike. ECC employees were able to zoom in with a nearby camera and offer information to police officers and rescuers at the scene.

In regard to any privacy issues, Satterfield says that hasn’t been a problem so far. He noted that stepping into a public space technically negates many of an individual’s privacy rights. Satterfield did mention that the ECC does not record the cameras and employees only monitor them when an incident arises. 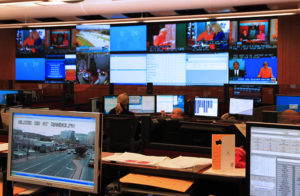 “We don’t sit there and actively monitor the cameras waiting for something to happen. We only monitor them if something is going on,” Satterfield said. “When we’re not using the camera shots, they’re wide angle, panoramic. We only zoom in when we’re using them for incidents.”

Another upgrade in the works is the county-wide installation of fiber optic lines. This will allow ECC workers to assist remotely with tasks that previously had to be performed on the scene. For example, Putnam said if a major disaster were to occur in the metro region, fiber optic lines would allow workers to remotely program all of the Arlington traffic lights to get people out of the county. Right now, that only can be done in person by manually programming each traffic signal box.

All 911 calls are recorded and dispatchers can access the audio for about 90 minutes. After that, they’re archived and stored for 365 days. Arlington’s ECC has a policy not to release the recordings to the media or residents who request them. They will, though, release them occasionally as evidence in criminal cases. Some of the employees have had to testify in court about what happened when they answered a certain 911 call. That occurs, explained Putnam, in rare situations such as someone calling in and confessing, “I just killed someone.” 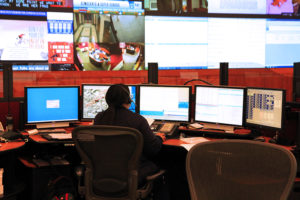 Instead of dwelling on those cases, the employees by and large choose to focus on the positive impact they have had on the community. Although it’s not widely publicized, a number of them have received awards for helping to save someone’s life over the phone. Take, for instance, the worker who modestly shrugged while explaining she helped save a baby’s life by walking the caller through each step of CPR. For ECC employees, it’s all in a day’s work.

“We’re all dedicated professionals. We just want to take care of the county,” said Putnam. “I hope you never have to call, but if you do, we’re here for you.”