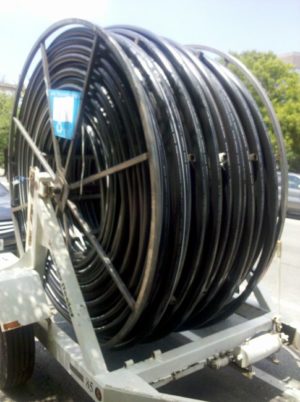 The first phase of the county’s project to install fiber optic lines — an effort to upgrade outdated copper lines installed nearly 30 years ago — is nearly complete.

So far, about one-third of what will be 60 miles of line has been installed in sections stretching from Clarendon to Glebe Road in Ballston, down Glebe Road to Columbia Pike, and east to the Air Force Memorial. The project, which has been dubbed ConnectArlington, will eventually link over 90 individual sites around the county.

The new network will allow for more communication capacity thanks to increased bandwith compared with the old copper lines. In addition to connecting government buildings and structures, officials say it’s designed to improve communications with residents as well.

With the new network, residents will experience improved service for calls to 911. Up until now, the county’s towers for emergency radio communications worked via microwave. Factors like overgrown foliage and bad weather can interfere with microwave signals, but shouldn’t affect the new fiber optic system. The lines also allow for command centers throughout the county that can be activated in case of emergencies.

“Everybody wants to be able to communicate more and more,” said Jack Belcher with the county’s Department of Technology Services. “So the more we can put into this network the better, as far as residents communicating with us.”

The system is also expected to improve traffic management and public transportation with an intelligent transportation system. Such a system should allow for automatic adjustments of signal timing when traffic patterns suddenly change, like during an accident.

Another benefit of the fiber optics is a redundant network. That means a break in one line should still allow information to transfer via another route along the network. Belcher said that will prevent entire buildings from experiencing outages, which sometimes happens under the current system.

Currently, the focus is on wiring what’s considered the infrastructure “backbone” of the system, including nearly 60 traffic signals and 11 public safety ports. The ultimate goal is to add 32 county buildings and 18 Arlington Public Schools buildings to the network. The first stage of that process is slated to begin in fall of 2013.

“The easy part is building the core network, like traffic signals and radio tower,” said Belcher. “The challenge will be expanding to the schools and the county buildings down the road.”

Construction on the first phase is wrapping up, and the next phase, which will include work in Shirlington and Fairlington, is expected to be completed in the spring or summer of next year. The third phase involves various traffic signals north of Route 50. Work on that is expected sometime between 2013 and 2015, pending funding approval.