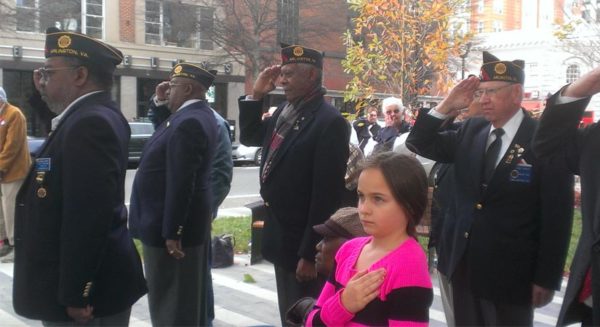 Veterans Day Ceremony in Clarendon — Members of local American Legion posts gathered at the Clarendon War Memorial on Monday to dedicate a temporary plaque bearing the name of six fallen servicemembers who hailed from Arlington. [Patch]

Fewer Trains Makes for Crowded Commute — Metro commuters who had to work on Veterans Days experienced delays and crowding due to Metro running on a reduced holiday service schedule. [Washington Post]

Parents Keep Pushing for FLES — Parents whose children are in elementary schools that don’t yet have the Foreign Language in Elementary School program are keeping up the pressure on school and county officials. “Despite paying the same tax rate… we are not receiving the same education,” said one Taylor Elementary parent. FLES provides elementary students with just over two hours of Spanish language education a week. [Sun Gazette]

Solar Lab at Va. Tech Ballston Building — In addition to helping to lower energy costs for the building, a solar panel array on the top of the Virginia Tech Research Center in Ballston is serving as a laboratory for graduate students. [Virginia Tech]

Krusinski Case Goes to Trial — The case against Lt. Col. Jeffrey Krusinski, the former chief of the U.S. Air Force Sexual Assault Prevention and Response branch who was accused of grabbing the breasts and buttocks of a woman in Crystal City, goes to trial today. A jury is expected to start hearing arguments in the case this morning.