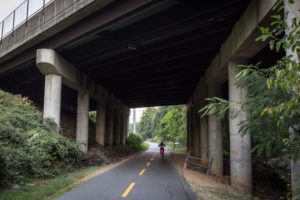 Local historian Ron Beavers will lead a discussion tonight about the role the Alexandria, Loudoun and Hampshire Railroad played in helping the Union during the Civil War.

The railroad line, which ran through Arlington, was later renamed the Washington and Old Dominion Railroad and is now the popular W&OD trail. The western portion of the line was attacked by Confederate forces during the war but the eastern portion, through Arlington and Alexandria, fared better and helped to provide logistical support to the Union war effort.

The talk will be held tonight (Thursday) from 7:00 to 8:30 p.m. at the Arlington Central Library auditorium (1015 N. Quincy Street). From the library website:

Historian Ron Beavers will discuss the little used Alexandria, Loudoun and Hampshire Railroad, which once ran through Arlington County but is today one of the Washington area’s most popular bike trails. Learn what caused this transformation – from an underachieving rail line to a major contributor to the Union war effort – and what became of this railroad after the Civil War.

Though now a beloved path for both commuters and recreationalists from Arlington to Loudoun County, the original plan for the AL&H was impressive. Entrepreneurial Virginians hopes to compete with the B&O Railroad for the rich coal fields of what is now West Virginia. But engineering difficulties and financial struggles impeded these plans, reducing the rail line to a local carrier for freight, mail and people just before the Civil War. When the war came, the western portion of this railroad suffered complete destruction. The eastern facilities (Alexandria and Arlington) fared much better. Their contribution to the Union war effort was crucial to success in the Eastern Theater of Military operations. Ownership returned to AL&H directors after the war, but their original plan to reach West Virginia never came to fruition. The rail line went through many reorganizations and mergers, yet continued to serve Arlington and Northern Virginia until the 1960s. Last known as the Washington & Old Dominion Railroad, it ultimately became a 44 mile-long park that we now call the W&OD hiker/biker trail.

Beavers last spoke before the Arlington Historical Society in March about Arlington County’s retrocession to Virginia in 1847. He is a seventh generation Virginian and retired federal employee with a life-long interest in history and railroads.