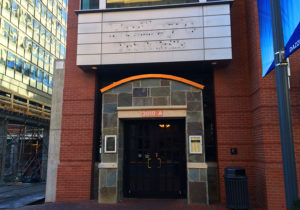 Workers could be seen removing the Bailey’s sign from the building today. The Crystal City location has also been removed from the sports bar’s website.

The Bailey’s in the Ballston Common Mall is still open and employees there did not have any information about any possible plans to close.

A tipster tells ARLnow.com that the space formerly occupied by Bailey’s in Crystal City is being considered for a possible music and comedy venue.