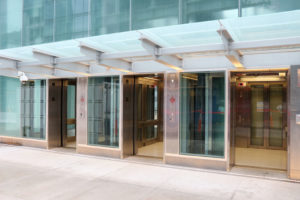 (Updated at 5:50 p.m.) The three two-month old elevators at the Rosslyn Metro Station were all out of service this morning, leaving commuters to use the long escalators on the other side of N. Moore Street.

The problem, according to Arlington Department of Environmental Services spokesman Eric Balliet, was caused after Metro workers turned off power to the station after closing Thursday night. The new elevators failed to restart this morning when the power was turned back on.

“We apologize to Rosslyn Metro riders,” Balliet said in an email. “We’re working with [Washington Metropolitan Area Transit Authority] and our contractor to address unforeseen issues like this in the future.”

The elevators were designed and constructed by DES and opened Oct. 6. Friday morning was not the first time there have been problems with the high-speed elevators, which are designed to carry thousands of passengers a day. WMATA spokesman Dan Stessel said that the elevators are under a yearlong warranty with the manufacturer, meaning Metro is not responsible for maintaining and repairing the elevators.

Two of the elevators returned to normal operations around 10:30 a.m., Metro spokeswoman Morgan Dye said in an email. The third elevator has been out of service — and continues to be out of service — due to an unrelated issue.

“It is not uncommon for there to be a need for fine tuning during the initial ‘break-in period’ on any new machinery — whether it be elevators, escalators, railcars, buses, etc.,” Dye said. “Working through the fine-tuning of this kind of equipment is routine and expected.”

“Many of the problems experienced since opening are typical for an elevator break-in period,” he said. “In fact, the number of disruptions had been decreasing week by week until this power outage for track work. We’ll continue working with our contractors to ensure higher levels of reliability.”