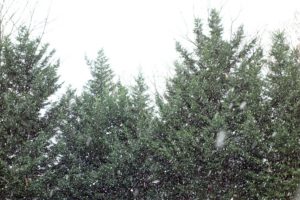 Roads around Arlington are reported to be icy and treacherous as more freezing rain is expected to fall overnight.

The area is under a Winter Storm Warning through 10:00 a.m. Monday as forecasters call for a quarter inch of ice. Via Twitter, readers have reported slick roads, especially on neighborhood streets. A Domino’s delivery driver in south Arlington told ARLnow.com that side streets were “very bad,” and that another driver had been involved in an accident. Bridges were also said to be particularly icy.

VDOT, which is responsible for maintaining highways and certain major roads in Arlington, says Monday’s morning rush hour could be impacted by the slick conditions.

“Crews are plowing as well as heavily salting roads and will continue to do so through tomorrow morning’s rush hours,” VDOT said in a tweet.

Fairfax and Loudoun County schools will be closed Monday. So far, there has been no announcement from Arlington Public Schools.