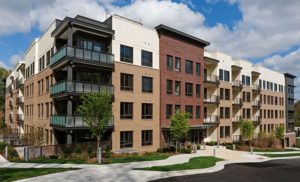 “We give you a lot of opportunities to enjoy the outdoors, a lot of outdoor areas to appreciate nature,” said Shelley Brooks, Regional Portfolio Manager for Bozzuto Management Company. “It’s a very special community. It’s modern, yet elegant. I think they’ll go very quickly.”

The complex had previously been known as “Grayson Flats” and was intended to be marketed as apartment rentals. But Reston-based Silverwood Companies announced its purchase of the property in April and repositioned it as a condominium building, while also changing the name to “The Avery.” The property was recently repositioned again as the Avery Row apartments; it is still owned by Silverwood and Bozzuto Management Company currently oversees the property.

Brooks explained that The Avery opened for condo sales in early June and interest rates increased less than three weeks later, stopping interest in the condos. Silverwood reassessed the market and determined apartments were a better option, especially given what it calls a lack of large, luxury units in the area.

The apartments are ready for immediate move-in. So far, one apartment has been leased and there are 66 others available. Monthly rental prices range from $2,345 for a one bedroom to more than $3,430 for a two bedroom with den.