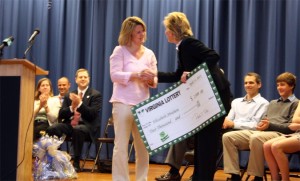 The Arlington School Board will vote next week on whether to limit school employee gifts to $100.

Arlington Public Schools staff has been working to develop a more detailed gift policy, and initially the proposal called for limiting gifts from a single donor to $50 over the course of a school year.

After meeting with community groups like the PTA, the Arlington Employee Association, the Budget Advisory Council and school principals, the School Board decided to double the proposed gifts cap.

“The PTAs were satisfied that [increasing the limit to $100] would be fine,” School Board Chair Abby Raphael said at last week’s School Board meeting. “They’re not giving individual gifts to individual staff members that exceed that.”

When the gift policy was first publicly circulated in October, it was unclear how some gifts, like homemade items or baked goods, would be counted toward gift limits. Staff has revised the policy and outlined that those items would not be counted as gifts, nor would payments like those that come with Teacher of the Year awards.

Many board members still had lingering questions about areas the gift policy covered — such as parents who are members of the PTA who want to give gifts outside of the organization — and Assistant Superintendent of Finance and Management Services Deirdra McLaughlin said not all situations could be accounted for.

Board member Emma Violand-Sanchez asked McLaughlin to begin an evaluation of how many gifts were given out in each school for comparison’s sake.

“I know there are significant differences when you have a school that’s 85 percent free and reduced lunch, so what happens? ” Violand-Sanchez asked. “Over the holidays, what happens to teachers if you teach in certain schools? Somehow, your Christmas is different.”

The School Board is expected to vote on the policy at its Dec. 19 meeting.