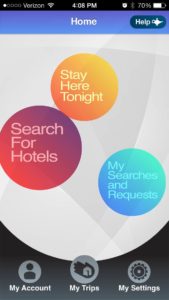 The former software engineer, U.S. Army Reserve infantry officer and world geography teacher at Swanson Middle School was in charge of I.T. learning for Marriott International when he came up with the idea for a travel site that lets customers search for prices at hotels without having to enter a date.

Hart told a coworker about the idea the next day. He says she came to him the day after with eyes red, telling him, “I couldn’t sleep last night thinking about your idea.” He told other coworkers, all agreeing that it was an idea to hold on to. Hart told his wife, expecting to be shot down. She encouraged him to go for it.

He told his family, which gathered and told him they would support him financially. Hart told a friend who was a graphic designer; she was on board. He told another coworker at Marriott who could help build the technology; sign me up, he said.

“I was looking for people to tell me it was a bad idea,” Hart said. “I didn’t have the courage to initiate. Eventually, I was too scared not to do it. I was thinking ‘I’m going to regret this for the rest of my life.'” 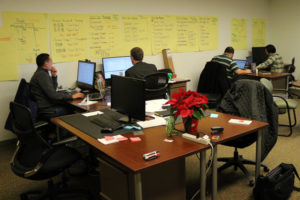 The app — available only on iPhones and iPads for the moment — allows users to search rates for cities without having to enter a date. They can also select a rate for a particular hotel and have the app notify them when a room comes available at the rate, even when the user is offline.

The app is just one-third of Imagine If’s business. Another third is the cloud infrastructure largely build by Kosmider, which fuels the app as well as Imagine If’s third — and potentially most intriguing — component, from a business standpoint: a design browser.

Those offline user price requests will soon be “aggregated and anonymized” and shown to hotels, the only customers who can access the demand browsers. Hotels can, for a flat fee, look through the demand browser to see exactly how much customers are willing to pay for a room in a city, or even their hotel specifically.

“The demand browser at the hotel level is the really exciting part,” Hart said. “We think the whole product can go really big. We’re going for the moonshot by building the space station first.” 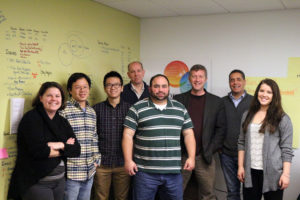 Hart and his co-founders spent almost a full year designing the app before “writing one line of code,” he said. It was built a few months after the design was complete and approved by the App Store last month.

Hart and his co-founders have been using their personal and professional networks to raise money. Investor meetings went better than Hart could have ever imagined — “the first person popped $25,000 right there. The second meeting, the guy was ready to write me a six-figure check. That was an eye-opener” — and now they have raised a total of $1.5 million in seed money.

(Chacon walked in during the middle of ARLnow.com’s interview and Hart handed him another check from an investor.)

The company was started as a “third shift” business, after everyone’s day jobs and families. The team would have weekly meetings on Tuesdays nights from 9 until the wee hours of the morning. The team is bigger now, with a large handful of full-time employees, consultants, advisors and volunteers in cities like Denver and Pittsburgh. Home base, however, is at Carr Workplaces in Clarendon. 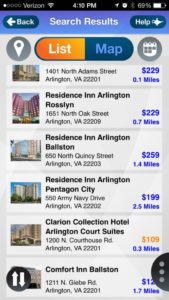 Half of Imagine If’s workers are women, a rarity in the startup sector. Hart thinks that’s part of why he’s been so successful in raising capital, despite not having a product to show for much of the company’s existance. It’s also a big part of what Hart calls Imagine If’s “tribal identity,” which helps morale around the office.

Another key to Hart’s success? Good luck, and lots of it.

“There has been unbelievable luck. Luck after luck after luck,” he said. “We’ve had money come in within days of running out of it. As much as we’ve done, we’re in a race against time and the competition, so we rarely look back on it.”

“When we do reflect, it’s incredible,” he continued. “We had someone we never met invest $100,000 in us because his son was looking into us. He’s invested more since. About every workplace we’ve been in, people in other offices have invested in us. A lot of our advisory board members are also investors, which is rare for a startup.”

The cloud, the app’s interface and the demand browser are built to scale, and built flexibly. Hart hopes to have 1,000 active users on StayAtHand by the end of January, and he and the team are working on building all three components of the business. But they have an eye on other industries into which to expand into the future.

“We’re like Pixar,” Hart said, using analogies to explain many of his points, a tactic he picked up teaching middle school for a decade. “We hope StayAtHand is like our Toy Story. If it’s successful, we have other things we want to go into.”