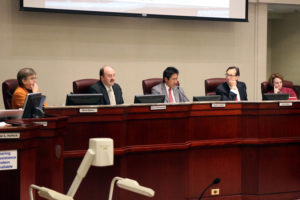 (Updated at 3:45 p.m.) The Arlington County Board is asking the Virginia General Assembly for the ability to charge paper and plastic bag fees at retailers as part of its 2014 legislative package.

The Board also is asking the General Assembly to approve a WMATA inspector position — which would enforce fares on the future Crystal City Transitway bus and streetcar line to make sure riders purchase tickets before boarding — and to repeal the hybrid vehicle tax.

Arlington needs state approval to enact a bag fee, which the Sun Gazette says “seems unlikely to get much traction.” (It has thrice failed to win support in Richmond.)

The Board doesn’t specify how much a bag fee would be — in Washington, D.C., and Maryland it’s 5 cents — but says it would be exempt if the bags were used for ice cream, meat, fish, poultry, leftover restaurant food, newspapers, dry cleaning, alcoholic beverages, and prescription drugs. The funds from the fees would go into the Water Quality Improvement Fund.

The fare inspector, if approved, would be able to give violators citations or tickets and would also be responsible for monitoring the connecting Alexandria Bus Rapid Transit line. The inspector wouldn’t have any police powers, the Board proposed.

In general terms, the county encourages the legislature to avoid shifting costs to localities, achieve financial sustainability and to navigate the transitional period from the Bob McDonnell administration to Governor-elect Terry McAuliffe.

In all, there are 43 requests in the county’s 2014 legislative package. Other requests include studying the efficacy of separate courts for minor drug offenses, improving accessibility at polling places and enacting no-excuse absentee voting.