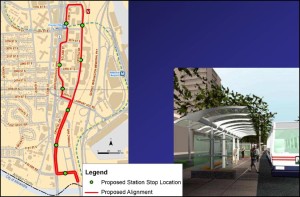 A new bus transitway is coming to Crystal City and Potomac Yard, and planners are asking for the public’s help to decide what kind of art should be placed along the route.

To that end, a public forum will be held tonight at 6:30 at the the Aurora Hills Community Center at 735 18th Street S.

“An artist has been commissioned to create public art along the corridor,” a flyer advertising tonight’s meeting says. “Join us as we help the artist gain a greater understanding of the Crystal City and Potomac Yard communities so she can develop truly site-specific work that meets the goals of your community.”

Next week another public meeting is scheduled to discuss the transitway itself. That meeting will be held from 6:30 to 8:00 p.m. on Monday, June 27, also at the Aurora Hills Community Center.

Construction is expected to begin next year.