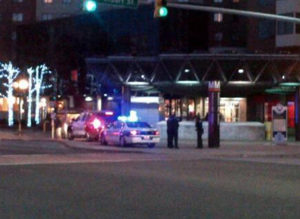 (Updated at 6:05 p.m.) Reports of a suspicious person at the Ballston Metro station had police racing to the scene shortly after 5:00 p.m. to investigate.

In addition to the Arlington County Police Department, WMATA spokesman Dan Stessel says Transit Police were on the scene investigating the report of a suspicious male subject aboard an inbound train.

Orange Line trains had been single tracking between Ballston and East Falls Church while police searched the station and the train, but the train in question has been released and was taken out of service. Normal service has resumed but some delays remain.