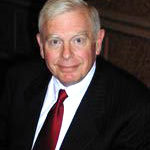 Rich Doud, the long-time president of the Arlington Chamber of Commerce, will be retiring in May.

The announcement was sent to Chamber members this afternoon. This year’s Chamber chairman, Tim Hughes of the law firm Hughes, Bean, Kinney & Korman P.C., will lead a search committee to find Doud’s successor.

The Chamber issued the following press release about Doud’s retirement.

After 23 years as President of the Arlington Chamber of Commerce, Rich Doud has announced that he will retire from his position effective May 15, 2014.

Doud joined the Arlington Chamber in September of 1990 to begin his tenure as the membership-based, nonprofit organization’s President, then called Executive Vice President. Under Doud’s leadership, the Chamber has made a number of achievements, including creating the Arlington Business Hall of Fame to recognize impactful business leaders in the community, developing the Community Action Committee to build stronger relationships between businesses and nonprofits, ensuring firm financial stability for the Chamber, and founding Leadership Arlington.

“It is impossible to fully express the satisfaction I have experienced working to build a better Arlington and increase opportunities for businesses,” said Doud. “I appreciate being given the chance by this great organization and the incredibly capable people who comprise our membership and staff who have bettered the lives of many. The achievements of the Chamber over the past two decades have been collaborative efforts between members and staff.”

As a sixty year resident of Arlington, Doud has immersed himself into and become a prominent figure within the community. During his tenure, Doud has received honors such as: Chamber Executive of the Year, Virginia Association of Chamber of Commerce Executives; Outstanding Civilian Service Medal (twice); United State Army; Legacy Award, Leadership Arlington; Spirit of Community Award, Arlington Community Foundation; and more.

His involvement in Arlington extends to his participation in community organizations and serving on various commissions and committees. A few highlights over the years include: founder and member of the Board of Regents of Leadership Arlington; assisted with the publishing of Where Valor Rests, a book about Arlington Cemetery which is given at burials there to the families; member of the Arlington County Economic Development Commission; member of the County Manager’s Institutional Leaders Roundtable; volunteer for Volunteer Arlington programs; member of the Police Chief’s Advisory Council; and member of the Washington Business Journal’s Thought Leadership Panel.

Doud came to the Chamber after a series of successful entrepreneurial ventures running small businesses. In 1984, his company was ranked 35th in the nation on Inc. magazine’s annual list of the 500 fastest growing companies in the United States.

Doud retires to spend time with his wife, as well as enjoy more family time with his three grown children and two grandsons (with a third on the way!).

2014 Chamber Chair Tim Hughes, Bean, Kinney & Korman P.C., will head a search committee seeking candidates to fill the position of President at the Arlington Chamber of Commerce. Plans for a celebration honoring Doud and his service throughout the years will be announced at a later date.

END_OF_DOCUMENT_TOKEN_TO_BE_REPLACED

More Stories
Your Beermonger: On Greener Grass and OverreachOpen Houses in Arlington This Weekend