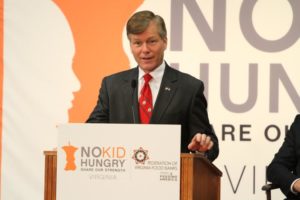 The 43-page indictment lists more than $140,000 worth of luxury goods, golf equipment, clothing and dietary supplements subject to federal seizure should the McDonnells be convicted.

From a Department of Justice press release:

According to the indictment, from April 2011 through March 2013, the McDonnells participated in a scheme to use the former governor’s official position to enrich themselves and their family members by soliciting and obtaining payments, loans, gifts and other things of value from Star Scientific, a Virginia-based corporation, and “JW,” then Star Scientific’s chief executive officer. The McDonnells obtained the things of value in exchange for the former governor performing official actions on an as-needed basis to legitimize, promote and obtain research studies for Star’s products, including the dietary supplement Anatabloc®.

The indictment further alleges that the McDonnells attempted to conceal the things of value received from JW and Star to hide the nature and scope of their dealings with JW from the citizens of Virginia by, for example, routing things of value through family members and corporate entities controlled by the former governor to avoid annual disclosure requirements. Moreover, the indictment alleges that on Oct. 3, 2012, Robert McDonnell sent loan paperwork to a lender that did not disclose the loans from JW, and on Feb. 1, 2013, the McDonnells signed loan paperwork submitted to another lender that did not disclose the loans. Similarly, the indictment alleges that on Feb. 15, 2013, Maureen McDonnell was questioned by law enforcement about the loans and made false and misleading statements regarding the defendants’ relationship with JW. Three days later, on Feb. 18, 2013, Robert McDonnell is alleged to have sent loan paperwork to one of the previously mentioned lenders disclosing the loans from JW. Additionally, after her interview with law enforcement, Maureen McDonnell allegedly wrote a handwritten note to JW in which she falsely attempted to make it appear that she and JW had previously discussed and agreed that she would return certain designer luxury goods rather than keep them permanently, all as part of an effort to obstruct, influence and impede the investigation.

An indictment is merely an accusation, and the defendants are presumed innocent unless and until proven guilty.

The indictment, returned in the Eastern District of Virginia, charges Robert McDonnell and Maureen McDonnell, both 59 and of Glen Allen, Va., with one count of conspiracy to commit honest-services wire fraud; three counts of honest-services wire fraud; one count of conspiracy to obtain property under color of official right; six counts of obtaining property under color of official right; and one count of making false statements to a federal credit union. Robert McDonnell is also charged with an additional count of making a false statement to a financial institution, and Maureen McDonnell is charged with one count of obstruction of an official proceeding.

“I thank the Assistant U.S. Attorneys, FBI, Virginia State Police and the Internal Revenue Service-Criminal Investigation for their exceptional efforts in the investigation of this case,” said Acting U.S. Attorney Boente. “We will continue to work tirelessly with our law enforcement partners to investigate and prosecute public corruption.”

“Today’s charges represent the Justice Department’s continued commitment to rooting out public corruption at all levels of government,” said Acting Assistant Attorney General Raman. “Ensuring that elected officials uphold the public’s trust is one of our most critical responsibilities.”

“One of the most important investigative responsibilities with which the FBI is tasked is ensuring that the integrity of our elected public officials has not been compromised,” said FBI SAC Mazanec. “The Richmond Division of the FBI and our law enforcement partners have diligently worked this lengthy, detailed and sensitive matter. I want to thank all those who have worked very hard and with great care on this investigation.”

“The state police and FBI agents assigned to this case have devoted an extensive amount of time and effort to this matter,” said Colonel Flaherty. “They are to be commended for their professionalism, objectivity and dedication to duty in conducting this highly complex and sensitive investigation.”

“Public officials hold positions of trust and must accept the transparency and accountability that our laws require and their constituents expect,” said IRS-CI Chief Weber. “IRS-CI stands committed to investigating those officials. This case should serve as a strong warning to those who might consider similar behavior. No one is above the law and everyone is accountable for their misdeeds.”

The case is being prosecuted by Assistant U.S. Attorneys Michael S. Dry, Jessica D. Aber, and Ryan S. Faulconer of the U.S. Attorney’s Office for the Eastern District of Virginia and Deputy Chief David V. Harbach II of the Criminal Division’s Public Integrity Section. The case is being investigated by the FBI, IRS-CI and the Virginia State Police.