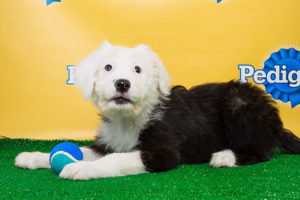 Before the Super Bowl last night, Animal Planet aired its annual Puppy Bowl, which featured one puppy from Arlington and another from Falls Church.

Ginger, a 6-month-old Old English Sheepdog Mix, was adopted by an Arlington family from the Fayette (Ohio) Humane Society in September. Ginger’s new home is with Miguel Monteverde and his family, according to the Record-Herald in Fayette County.

Monteverde told the paper that his family was looking to replace its former pet, another Old English Sheepdog, that died in 2012. He suggested that Ginger could be a formidable Puppy Bowl contender.

“Sometimes she can be a handful,” Monteverde said. “Her favorite activities are to play with her neighbors, Morgan and Oscar, our neighbor’s dogs. She’s full of energy and affection.”

Ginger wasn’t the only pup from the area to participate in the Puppy Bowl, which featured 38 dogs on a miniature football field playing with toys. Bach, a Bernese mountain dog/poodle mix, is from Falls Church.