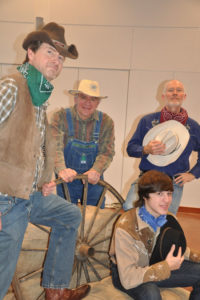 A local theater group is starting to refer to their February production of the Rodgers & Hammerstein musical classic “Oklahoma” as “Snowklahoma” after yesterday’s major snowstorm made rehearsing treacherous.

The Chalice Theatre is rehearsing in the Unitarian Universalist Church of Arlington, at the corner of S. George Mason Drive and Arlington Blvd. Show director Cynthia Young compared the cast and crew of the show to the pioneers the play is based on.

“Pioneers coped with ever-present danger — prairie fires, wild animals, drought, tornadoes, and even murderous criminals — and they survived by cultivating community,” Young said in a press release. “We try to have the same courageous attitude as the characters in the show. Whatever Snowklahoma brings, we’re going to pull together. So come on down, Polar Vortex, we’re not ‘a-feered’ of you!”

The set designers use school facilities to work, so the closed schools and the holidays have thrown a wrench into their building plans. That, coupled with the hazardous conditions, reminded Young why many community theater seasons begin in April.

“It’s definitely risky to mount a large-scale musical in the winter,” Young said. “The threat of a winter storm blowing in and making a shambles of our tightly constructed schedule is a huge worry. But as Aunt Eller says, ‘You gotta be hearty.'”