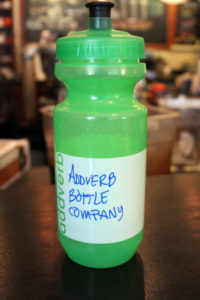 Nathan Cristler’s startup idea was born in a hospital bed.

Cristler had been training for a marathon when, after a 17-mile training run, he was hospitalized for dehydration. He resolved to carry a water bottle with him wherever he goes. When he started training for triathlons and doing elaborate swimming workouts, he needed a place to write the steps down.

“I thought, ‘how am I going to remember this?'” Cristler told ARLnow.com last week at BeanGood Coffee Pub, a few blocks from his house near Rosslyn. “So I wrote it down on a piece of paper and stuck it onto my water bottle and covered it with clear plastic tape.”

That day was in January 2013. Cristler didn’t do anything to pursue the idea until he went on a trip to South Korea — he’s a patent and trademark attorney by day — and started brainstorming a way to turn it into a business. When he returned from Korea in November, he hit the ground running, and the result is Addverb Bottle Company.

Addverb sells two bottles — a green, 21-ounce model for $9.99 and a blue 24-ounce model for $10.99 — as well as cleaning wipes and accompanying Sharpie pens. On each bottle is a white space for its owner to write workouts, reminders, motivational messages on.

It’s a simple idea, but Cristler researched it and saw an opening.

“Really, I wanted one,” he said with a grin. As for why he decided he was the right person to build the product, he said, “I seemed to be consuming a lot instead of creating. I had the idea around the same time that I wanted to be more of a creator. This is the first idea I thought where I have all the parts to produce what’s in my head.”

Cristler is bootstrapping the company, buying bottles directly from Specialized Water Bottles and buying special alcohol wipes for the best possible clean erase of the Sharpies. As demand has increased, he’s hired a delivery service because the trips to the post office were getting more and more frequent.

For a first-time entrepreneur with a full-time job, Cristler is passionate about his product but realistic about the future of Addverb. 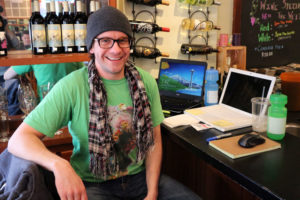 “One of the biggest things I’ve read about being a startup founder is you need to know when to cut if off,” he said. “I haven’t set that date yet, but I am conscious.”

He then shrugged, smiled and said, “at the very least I have some gifts for my family the next few holidays.”

He also has big dreams for what the company can be if it takes off the way he hopes it does.

“The dream is to grow into a health promotion company,” he said. “Obviously we’re for-profit to start while we go, but I’d love to be a nonprofit down the road.”

Before that, he’s planning to “pound the pavement” and visit some local running or biking stores. He’s working with a designer now to perfect a label. He’s developed a “social media strategy,” which includes making theme weeks for sports that could use Addverb bottles — like CrossFit — and to have a presence, or a booth, at local races.

Cristler designed the logo on the flight back from South Korea, before he had a full business plan or even any bottles. The patent attorney who spends his time going over other people’s ideas and products, has a vision and he’s excited to strike out on his own.

“I was able to do everything on my own here,” he said. He’s had friends and family give them ideas, and he told a story about learning how to start telling them no. Their ideas didn’t fit with what he felt the company needed to be at this early point. “I wanted to see if I could follow through with this.”