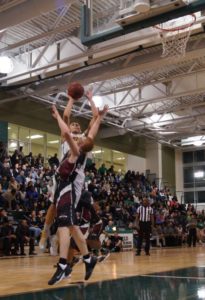 The Warriors (24-4) kept their 14-game winning streak alive with the victory, and will move on to the state semifinal game on Saturday at noon at Robinson Secondary School (5035 Sideburn Road, Fairfax). They’ll play the loser between Maury and Henrico High Schools, and if they win, they’ll play Friday, March 14, at 2:00 p.m. at VCU for the state championship.

The Warriors were led by Capitol Conference Player of the Year Dominique Tham, who scored 18 points, and Jalen Walton chipped in 17 to lead a balanced attack against the Panthers (27-1). Marqua Walton also scored 18 and hit a key free throw at the end of the game to seal the victory.

The win was the first regional championship for the Warriors since 2005 — they were regional runner-ups last year and lost in the state semifinal game. The Warriors defended their home court, just like they did in the conference championship game last week against Mt. Vernon. Walton told Dave Facinoli of the Sun Gazette that the Warriors didn’t feel any pressure.

“They came in undefeated and we felt they had all the pressure,” said Wakefield senior guard Jalen Carver, who scored 17 points and made three three-pointers. “So we wanted to play our game, slow them down in transition and keep playing hard.”

“The key to this game for us wasn’t on the court,” he said. “We wanted to get our players so relaxed like they were playing a game on the playground.”