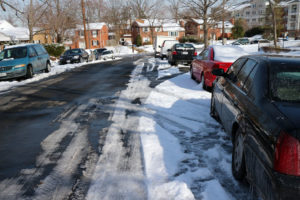 Forest Glen, an 84-home civic association between Glencarlyn and Columbia Heights West, is preparing to submit a request to the county to establish a permit parking zone in their neighborhood.

The neighborhood, one of the smallest in the county, spans from Glencarlyn Park to 7th Road S. and Tyriol Hill Park. The Forest Glen Civic Association has grown increasingly concerned over non-residents — specifically, residents of apartment buildings in neighboring communities — taking up available street parking they feel should be reserved for only neighborhood residents.

“Residents even drive a car from the apartment complex, park it on our street, and get into a different car already parked on our street,” Shawn Brown, a Forest Glen resident, wrote in an email to ARLnow.com. “That’s pretty crazy and really unacceptable.”

Forest Glen residents say street parking is nearly impossible to find late at night, with the streets filled not only with cars, but commercial vans and trucks. The civic association has prepared a draft appeal for the county to institute permit parking, citing the source of the problem as “the overcrowded apartments, condominiums, and duplexes that are located to the south of our neighborhood (between 7th Road S. and Columbia Pike and between Carlin Springs Road and Dinwiddie Street).”

County Parking Manager Sarah Stott says she considers Forest Glen and Columbia Heights West “basically one community.” The county is currently conducting a study to determine whether, instead of restricting parking, more street parking can be created along the streets.

“Maybe there’s one space here, one space there [to add],” Stott said, adding that the “signs team” is studying if signs can be moved to create spaces. “We’ve got some wide streets there, we could put in angled parking and see if that could work. That could gain you a lot more spaces than parallel parking. We’re having engineers see if there’s a way to do that.” 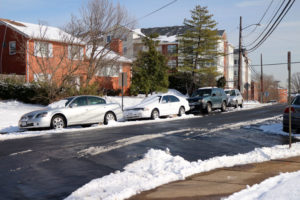 Stott expects the study to be complete by the end of the month or in early April; she’s retiring March 21 and her replacement, Mike Connor, has also been following the issue closely.

If the study yields results the civic association finds unsatisfactory, it may submit its draft appeal, which suggests creating its own special parking ordinance for Forest Glen. If it does, Stott says she’s not exactly sure what would come next.

“I don’t know what that process would be,” she told ARLnow.com. “We haven’t had that before where a civic association, or anybody has appealed to the county to write its own ordinance.”

The appeal also references the special parking zones that have been established in the much-larger neighborhoods of Douglas Park and Columbia Forest, which restrict nighttime street parking. Even if the draft were to become an official ordinance, Forest Glen residents may not be too pleased with the results. Connor said he doesn’t see a need to increase parking for Forest Glen homeowners.

The full text of the civic association’s appeal is after the jump.

Update at 9:20 a.m. — Forest Glen Civic Association President Ron Ross said the neighborhood’s “ideas for a possible appeal have not been finalized” and said the appeal sent to ARLnow.com does not reflect the civic association’s official stance. He added, “There is a considerable amount of parking in Forest Glen by non-residents, decreasing the parking space for Forest Glen homeowners. The additional vehicles have also brought peripheral problems, such as trash left on the neighborhood streets and lawns, noise during nighttime hours, as well as blocking driveways of homeowners.”

Forest Glen Civic Association and the residents of the Forest Glen neighborhood hereby request review of a decision of the Transportation Staff regarding a requested parking permit zone.

Background on Forest Glen. Forest Glen is a neighborhood of 84 single family homes in south Arlington, developed in the early 1960s. Our neighborhood is bordered on the north and west by Glen Carlyn Park, on the south by 7th Road South, and on the east by Tyrol Hill Park. There are only two streets by which to enter our neighborhood (S. Florida St. and S. Greenbrier St.). There are no through streets.

Our Parking Problem. Our neighborhood is confronted with several related parking problems. First, our streets are overcrowded at night with vehicles from outside our neighborhood. During the day, there is ample on-street parking. But at night (typically starting around 10:00 p.m.), vehicles from outside our neighborhood come into Forest Glen and park, with the result that there is virtually no on-street parking after midnight. We often see cars come into the neighborhood to park, and then the drivers get picked up by another vehicle to take them out of the neighborhood. Additionally, many work vans and other commercial vehicles park in our neighborhood; they are not owned or operated by residents of our neighborhood. There are many overnight taxis with Maryland and DC license plates that park in our neighborhood overnight and on the weekends. As a result, we have the usual problems associated with out-of-area parkers: litter, loitering, noise, unfamiliar persons, etc. These are the very problems that the County Board’s parking permit zone resolution is intended to address.

Source of the Problem. The source of the parking problem in our neighborhood is the overcrowded apartments, condominiums, and duplexes that are located to the south of our neighborhood (between 7th Road South and Columbia Pike and between Carlin Springs Road and Dinwiddie Street). There is apparently an insufficient amount of parking available to the residents in that area, so they park their cars in our neighborhood. Some out-of-area parkers probably come from farther away, though it is hard to tell because they share rides to and from our neighborhood to park their cars. We fear the problem is going to get worse in the future as two new apartment complexes are being developed in that area.

Decision of Transportation Staff. Earlier this year, we asked the Transportation Staff to initiate the process of creating a residential parking permit zone for our neighborhood (to restrict overnight parking in our neighborhood to residents and their guests). The Staff conducted one survey, and found that we met the occupancy criterion for establishing a parking permit zone (i.e., more than 75% of the on-street parking spaces were occupied). However, for the residency criterion (in which 25% or more of the vehicles must be from outside the zone), the Staff determined that our area would include the apartments, condos and duplexes that are not in our neighborhood but are located nearby. The Staff determined that 7th Road South, which divides our neighborhood from the apartments, condos and duplexes that are the source of our parking problem, is not a dividing line for purposes of delineating parking zones. The key factor in the Staff’s view was that 7th Road South is not a “major” or “minor” arterial, but is instead considered a “neighborhood principal.” The Staff therefore determined that the apartments, condos and duplexes outside of our neighborhood would be considered in our area for parking zone purposes. Under this approach, we would not be able to satisfy the residency criterion to establish a parking permit zone for Forest Glen (because all of the cars would be considered in our area).

Factors that Support Our View. We disagree with the Transportation Staff’s view. First, regardless of the technical designation of 7th Road South (i.e., “major arterial,” “minor arterial,” or “neighborhood principal”), the fact is that it is a major roadway that is a natural dividing line between neighborhoods. It is a heavily travelled arterial with double-yellow lines dividing it. It is a fire truck route and is used by several Metro and ART for several bus routes.

Second, the neighborhoods on either side of 7th Road South are materially different. Our neighborhood consists of single family homes that was developed as a neighborhood. In contrast, to the south of 7th Road are apartments, condos and duplexes. A Google map aerial view clearly shows the different character of the two areas.

Appeal. We respectfully request that the County Manager review the decision of the Transportation Staff and resolve this matter in our favor, either by overruling the Transportation Staff on the scope of what is in our area, or by initiating a special ordinance. For the first approach, the County Manager could determine that 7th Road South is an appropriate dividing line for purposes of establishing a parking permit zone in our neighborhood. The factors outlined above establish the justification for such a determination. We could then proceed with establishing a permit parking zone for the Forest Glen neighborhood. For the second approach, the County Manager could initiate a special ordinance similar to what Douglass [sic] Park and Columbia Forest (zones 21 and 22, respectively) have – night-time permit parking that excludes neighboring apartments. This also would resolve our parking problem. We would be happy to discuss either option with you.