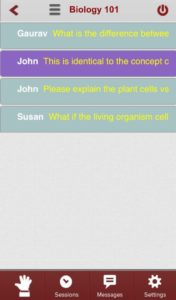 Gaurav Malik sat in Northside Social last week with a clicker that some colleges use for in-class participation. He said he showed it to a college student and her reaction was one of the reasons he built his tech startup, nClass.

“She said ‘this is horrifying,'” he said with a smile. “Students now expect to use one device for everything. Why wouldn’t you use the mobile phone instead of the clicker?”

Malik got the idea to incorporate phones into the classroom in the summer of 2012 when he was in an executive MBA program. Working for a cloud computing starting and coming from an IT background, Malik saw boundless potential for incorporating technology that wasn’t being tapped into.

It took Malik, his co-founder who’s no longer with the company, and a small team of interns and contractors both local and in India a year before nClass launched a pilot program in fall 2013 in several local universities, like Georgetown, George Washington and George Mason. The bootstrapped company built apps for iPhone, Android and for use on laptops.

“From an institution’s standpoint, they want to use the right technology and improve the student’s experience,” Malik said. “The professors want to keep students engaged, and the students want to be able to use their devices and not pay for additional hardware.”

There are several ways Malik designed nClass to be used in the classroom. Initially, Malik was just thinking about an attendance app for smartphones, but the idea grew and grew. Plus, he said, attendance “is a polarizing topic” among college professors, many of whom never call roll.

nClass allows teachers to give quizzes with students answering on their phones or computers, it allows teachers to take a “pulse check” in the middle of the lecture, to see who is grasping the material, paying attention, and who has checked out. It also allows students to submit questions electronically, which can help some who are too shy to participate still engage with the material. 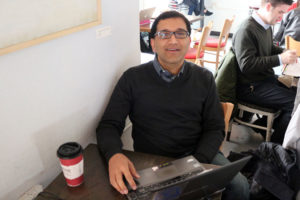 “The class could be discussing something controversial where the professor really wants honest input,” Malik said. “By using the phone, and allowing questions to be submitted anonymously, the professor can solicit more opinions.”

Malik said he’s not hoping to replace “face-to-face teaching” with his app, simply trying to improve and quantify the classroom experience. He admits that nClass would be most useful in large lectures where professors don’t have time to build relationships with individual students. It’s also useful to help professors grade participation in classes where it would normally be impossible.

“It broadens participation, but it also gives you an alternate way to collect class participation data,” he said. “A lot of discussion takes place in class, but there’s no record of it unless you’re an excellent notetaker. Because of this technology, we can now capture that data for later use.” 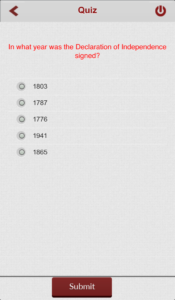 Malik spends a lot of time these days on college campuses, surveying professors and students and asking them ways to improve nClass. In fact, before a single line of code was written, Malik and his then-partner conducted surveys asking students and teachers what they would want out of a classroom app.

All the feedback has allowed Malik to “enhance his product” and make it more user-friendly, but that’s still in the beginning stages and he knows there are plenty of areas that still need improvement.

“One thing I’ve learned is you have to see first-hand how people are using it,” he said. In fact, that has been the fun part. Despite his IT background, Malik has always preferred to be in front of people, not computer screens. “If this involved just me sitting in one spot and coding, I couldn’t handle it. Talking to professors and students keeps it interesting.”

Malik has yet to charge a college for his project — he’s still in pilot phase — but he hopes to start generating revenue for the fall semester this year. He’s confident that institutions will purchase the product once they recognize its added value to the classroom.

“Institutions want to use new tools and technology,” he said. “Their customers, students, expect them to. They have to meet expectations. There’s a lot of noise out there, and their decisions become ‘how easy is it to adopt and integrate with our existing technology?'”

Malik is “having a blast” living the life of a startup CEO — he had just returned from the SXSW Edu conference in Austin, Texas — but did admit one thing most founders experience in the early going.