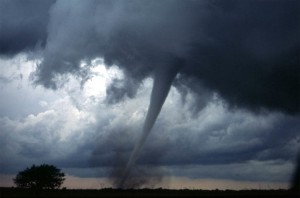 The Arlington Office of Emergency Management is asking all residents and office workers in Arlington to participate in a statewide tornado safety drill tomorrow morning.

The drill will take place at 9:45 a.m. on Tuesday. Participants are asked to “go low and stay low” by going to the lowest level of the building they are in, staying away from windows and doors, and crouching down and covering their heads, according to OEM.

Those with National Oceanic and Atmospheric Administration (NOAA) weather radios will get a test alert at 9:45, notifying them that the drill has begun.

The full press release from OEM, after the jump.

March 11, 2014 is Tornado Preparedness Day in Arlington County. Unlike hurricane season, there is no such thing as a “tornado season,” and no part of the Commonwealth is immune from tornadoes. They can hit at any time of the year and at any time of the day.

There are two things that every family, business and organization should do to get ready:

1. Get a NOAA Weather Radio with SAME alerts.
2. Participate in the statewide tornado drill Tuesday, March 11, at 9:45 a.m.

“NOAA Weather Radios are the best way of getting tornado warnings,” said Bill Sammler, NWS warning coordination meteorologist. “A network of radio stations broadcasts weather data from the nearest National Weather Service office. When a tornado warning is issued, the Weather Radio sounds an alarm followed by information on where the storm is, which way it’s moving, and telling people in its path to take cover.”

SAME alerts stands for Specific Area Message Encoding, a feature that lets you program your radio for your area. NOAA Weather Radios are available at electronics and sporting goods stores, department stores, boating stores and online. They come in battery-powered models and many also have AM/FM band. Some have strobe lights for the hearing impaired. Prices start at about $30.

March 11, 2014 is also the state wide preparedness drill. Arlington schools, businesses and residents have an opportunity to practice their tornado safety plans. At the same time, the National Weather Service will be testing their public warning systems.

The general rule for tornado safety is “go low and stay low”, which means go to the lowest level of the structure, away from windows and crouch in a low position with your head covered.

The majority of tornadoes occur between 3 and 9 pm. Think of where you would normally be during that time…at school, work, home, or in the car. You may only have a few seconds to react. Decide NOW where you would go if a tornado warning were issued.

Tornadoes can occur with little or no advance warning. It is important to have a weather radio nearby so you can listen for tornado and other severe weather watches and warnings.

If the National Weather service issues a tornado warning for Arlington, your weather radio will sound an alert, indicating that you need to move to a safe area immediately.

Sign up for Arlington Alert to receive free emergency messages within seconds to pagers, cell phones and e-mail. This is a great way to receive emergency information and critical safety messages when you need them most. To sign up at no cost, go to www.arlingtonalert.com. Alerts are available in Spanish, also.

Pre-set your battery operated radio to 1700 AM Arlington for up to date emergency information including weather emergencies. You may also call 1-415-655-0811 to hear it via your phone. (Long distance charges apply.)

Arlington County is participating in tornado preparedness with the Arlington County Office of Emergency Management, Arlington Schools, Arlington Chapter of the American Red Cross, the Citizen Corps Council, and the Community Emergency Response Teams. At 9:45 a.m., the NWS will send a “test” tornado warning on NOAA Weather Radio. This will prompt radio and television stations to broadcast a test message. Some NOAA Weather Radios will not automatically turn on when receiving a “test” signal, so participants should turn on their radios approximately five minutes before the start of the drill.

For more information about tornado preparedness, please visit www.arlingtonva.us or contact Mr. John Crawford/PIO from The Office of Emergency Management at 703-228-4080.