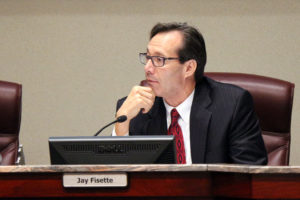 Arlington County Board Chair Jay Fisette will be a speaker this Thursday at the showing of a film that examines the impact that plastic bags and other plastic products have on the environment.

The film, called “Bag It: Is Your Life Too Plastic?” will be presented at Arlington Cinema & Drafthouse (2903 Columbia Pike) this Thursday at 7:00 p.m. The event is hosted by Tap In Arlington, a grassroots organization campaigning against single-use plastic water bottles.

Fisette launched a “personal crusade” against plastic bottles last year, is a supporter of Tap In and debated a bottled water industry executive in January. Fisette will speak alongside the film’s director and star, Jeb Berrier.

In promotional material, the film is described as “touching and often flat-out-funny” and Berrier is said to be an “everyman… who is admittedly not a tree hugger.”

Tickets for the event are $10 at the door, or $5 for students and seniors.

END_OF_DOCUMENT_TOKEN_TO_BE_REPLACED

More Stories
Road Closed After School Bus Hits Utility PoleAsk Adam: How Do I Reduce Outside Noise In My Home?