(Updated at 1:30 p.m.) An Arlington County snow plow was spotted driving the wrong way on Military Road today, and part of the incident was caught on video.

Jason Berry, a local filmmaker and entrepreneur, says he encountered the snow plow head on while driving down Military Road in the Donaldson Run neighborhood around 7:30 a.m.

“I came over a hill and headed right towards me was this snow plow in my lane,” Berry told ARLnow.com via email. “The driver did not move or slow down, I was forced out of my lane into the deeper snow in between lanes. I temporarily lost control of my car and managed to use the e-brake to slide to a stop.”

“I then was facing the other direction in the other lane so I proceeded to catch back up to the plow and that is where the video starts,” Berry continued. “The plow is seen driving in the wrong lane THROUGH an intersection (of Military and Marcey Road), which is at the crest of a blind hill.”

Berry, 44, said he has “never seen such a brazen act of indifference” on the part of a snow plow driver while living in Arlington and, previously, in snowy Rochester, N.Y.

“This is completely unacceptable behavior for snow plowing and it was in violation of Arlington County’s plow driver practices and training,” Dave Hundelt, a manager at Arlington’s Water, Sewer and Streets Bureau, told ARLnow.com via email just after 12:30 p.m. 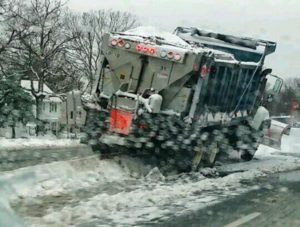 “As soon as the County learned of the unacceptable behavior, we identified the driver and removed him from duty,” Hundelt said. “We will be taking appropriate action with this employee. Safety is a priority for the County, and we encourage any driver issues or concerns to be reported to the police.”

In a separate incident, another snow plow — a VDOT contractor, according to a department spokeswoman — became disabled after it ran up on the center divider on Route 50 near Glebe Road this morning. No word yet on how that happened.