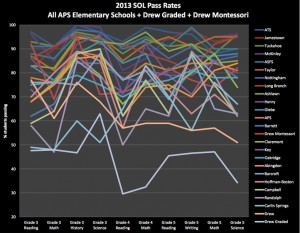 (Updated at 5:00 p.m.) The standardized test scores for elementary school students in the Nauck neighborhood are slipping well below the county-wide average, and some parents are fed up with the disparity.

Over the past 10 years, the graded program at Drew Model Elementary School has performed at an average of 23 percent below the county’s average in the 3rd-through-5th grade Standards of Learning exams, according to data from Arlington Public Schools’ Department of Planning and Education.

The numbers get worse the older the students get. Third-graders in the graded program — as opposed to Drew’s Montessori program, which takes children from around the county and performs on par with other elementary programs — pass the reading SOL 23.9 percent less frequently than APS average and the math 17.9 percent less frequently. For fifth-graders, that drops to 30.4 percent worse in reading and 23.2 percent worse in math.

The numbers were highlighted during last Thursday’s meeting of the Arlington School Board when Terron Sims, former County Board candidate and co-chair of APS’ Superintendent’s Committee on Eliminating the Achievement Gap, spoke out decrying Drew’s struggles.

“Since the children of the Nauck community have been allowed to attend their neighborhood school, the school has failed them,” Sims said. “For years, Drew parents and administrators bickered over whose program was better, who should occupy Drew. But now, after 10 years of failing our kids, the fighting has stopped, for all those concerned now understand that a drastic change must occur at Drew if we are to save the children from a mediocre education, and thus save them from a mediocre life.” 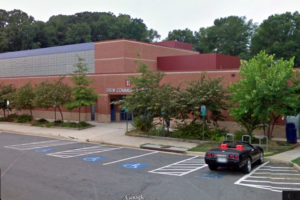 A group of parents and community members, led by Sims, have formed the Coalition for a New Drew to try to reverse the school’s fortunes. In a press release, the coalition alleges that APS had been releasing Drew’s Montessori SOL statistics over the past few years, but not the results for the students from the graded program as some members have requested.

The statistics cited above were compiled by the Coalition. APS officials confirm the data is pulled from its report from Planning and Education’s presentation to the Arlington Montessori Action Committee.

“The data compiled by the coalition shows there is a stark difference between the educational readiness for most Arlington students and a disproportionate number of SOL-tested Drew Graded students,” Nauck Civic Association Community Affairs Committee chair Portia Clark said in the release. “We know the students at Drew have the desire to learn and we just want them all to succeed.”

Another chart released by the Coalition shows that less than 50 percent of fourth and fifth graders in the Drew graded program are passing any SOL test. The combination of the Montessori and graded programs still makes Drew the worst-performing school in the tests.

The push for change comes at a time when the school is already in administrative flux. Drew’s principal, Jacqueline Smith, resigned earlier this month after being arrested for driving under the influence. Smith has been replaced by interim Theresa Bratt, who had retired from APS last year.

“A new Drew is overdue, and the time is right to fix this instructional problem,” Cathleen Drew, a former Drew PTA president, said in the press release. “As APS looks for ways to solve its capacity problems, it should put instruction first and prioritize solutions that promote both academic and space solutions.”

Photo (top) via Google Maps. Chart (bottom) via Coalition for a New Drew.