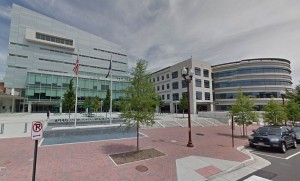 A George Mason University law professor was pepper sprayed in his classroom today after a man tried to place him under a citizen’s arrest, according to Arlington County police.

The incident happened at GMU’s Arlington campus, near Virginia Square, around 3:00 p.m. Police say the man entered the classroom and attempted to place the professor under a citizen’s arrest. The professor tried to get the man — described as a white male in his 20s or 30s — to leave, at which time the man pepper sprayed him and a scuffle ensued, according to Arlington County Police spokesman Dustin Sternbeck.

The professor did not know the man, Sternbeck said.

An off-duty police officer heard the commotion and tried to intervene. The suspect fled but was arrested outside the school by Arlington County police officers, according to Stenbeck. He’s now being questioned by police. Several charges are pending.

Paramedics evaluated the professor and about a dozen students who were in the classroom at the time and suffered residual effects from the pepper spray. There were no reports of anyone being taken to the hospital.

END_OF_DOCUMENT_TOKEN_TO_BE_REPLACED

More Stories
NOVA Legal Beat: Is Being Called ‘Sexy’ Grounds for a Lawsuit?Consultant: Streetcar Could Generate $3 Billion for Economy