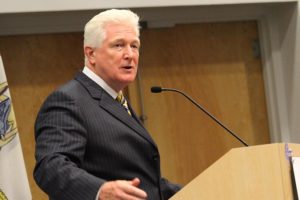 Rep. Jim Moran (D-Va.) is co-sponsoring a bill in the House of Representatives that would give federal workers a 3.3 percent pay increase for 2015.

The Federal Adjustment of Income Rates Act (FAIR Act), if it passes, would represent the biggest wage increase for federal workers since the 2008 recession. Moran co-sponsors the bill with Fairfax County Rep. Gerry Connolly (D), who introduced the legislation, Rep. Elijah Cummings (D-Md.), John Tierney (D-Mass.) and other House members.

Moran said in a press release announcing the legislation that the attrition in the federal workforce has increased 35 percent since 2009. In 2013, earnings grew in every industry except for civilian federal workers, whose earnings fell $6.7 billion according to the U.S. Department of Commerce’s Bureau of Economic Analysis.

Federal workers were granted a 1 percent pay increase last year, the press release said, but that lagged behind a 1.5 percent growth in inflation.

“Federal workers deserve to be compensated for the vital role they play in the lives of millions of Americans,” Moran said. “These are the men and women finding lifesaving cures at NIH, catching criminals, supporting our troops, and protecting the environment. They have bills to pay and families to support. After three years of pay freezes and too many furloughs, they’ve earned this modest, decent raise.”

After the jump, you can read Moran’s full press release:

“Federal workers deserve to be compensated for the vital role they play in the lives of millions of Americans,” Rep. Moran said.  “These are the men and women finding lifesaving cures at NIH, catching criminals, supporting our troops, and protecting the environment. They have bills to pay and families to support. After three years of pay freezes and too many furloughs, they’ve earned this modest, decent raise.”

The FAIR Act recognizes the alarming rate of attrition among federal employees.  Since 2009, the attrition rate in the federal workforce has increased by 35 percent, with more college graduates turning away from a federal career and many federal managers questioning why they should remain in federal service, according to statistics from the non-partisan Partnership for Public Service.

The 1 percent federal wage adjustment granted last year to federal workers still lagged behind the country’s historically low average inflation rate of 1.5 percent for 2013, to say nothing of average private sector wages which rose by 6.5 percent over the last four years, according to the Employment Cost Index.  Nationwide, earnings grew in 2013 in every industry except the civilian federal government, which fell $6.7 billion, according to the U.S. Department of Commerce’s Bureau of Economic Analysis.

“After a three-year wage freeze, wage-reducing work furloughs, sequester cuts, and a government shutdown, our nation’s dedicated federal employees deserve fair compensation,” Connolly said.  “Not only has our federal workforce been demonized and demoralized by the constant attacks from the House majority and the Tea Party, over the last four years federal wages have lagged far behind the private sector and have even failed to keep up with the rate of inflation.”

Federal employees have also done more than their fair share toward reducing the federal deficit.  Cummings stated that “they have endured a 3-year pay freeze and $140 billion in pay and benefits cuts.  A 3.3 percent pay increase in 2015 as called for in the FAIR Act would be a modest first step to help us retain and attract the best and brightest to our nation’s federal service.”

“By investing in the Federal Government’s most valuable resource, its talented workforce, the FAIR Act would begin repairing the significant damage that has been wrought on our overworked, underpaid, and unappreciated career civil service, while helping to ensure we can attract the best and the brightest to build the federal workforce of the future,” Connolly said.

The FAIR Act is already receiving endorsements and support from federal employee organizations, including NTEU, AFGE, and NARFE.

“Federal workers have done more than their fair share to reduce the federal deficit. This 3.3 percent raise for 2015  will help them keep up with rising costs of groceries, housing, gas and health care,” said NTEU National President Colleen M. Kelley.  “Reps. Connolly, Moran, and Cummings understand the vital importance of attracting and retaining a highly-qualified and experienced federal workforce that is fairly compensated and I am grateful for their leadership on this issue.”

“Providing our public servants adequate compensation is about more than just fairness, it is about maintaining an efficient and effective federal government,” said NARFE National President Joseph Beaudoin.  “The 3.3 percent pay increase for federal employees, proposed in your bill, would help to close the growing gap between public- and private-sector pay – now at 35 percent, according to the Federal Salary Council, based on Bureau of Labor Statistics data.”

“Federal employees have seen their standard of living deteriorate in recent years due to a three-year pay freeze, unpaid furloughs, and higher retirement contributions for newer workers, said AFGE National President J. David Cox Sr.  A 3.3 percent pay raise would help federal employees recoup some of that lost income and ensure the government is able to recruit and retain the high caliber workers that taxpayers expect.”

While many critics often label federal workers as “Washington bureaucrats,” 85 percent of federal employees live and work elsewhere across the 50 states and in every congressional district.

Connolly is the sponsor of the legislation.Rep. Moran, Cummings, Tierney (D-MA), Matt Cartwright (D-PA), and Michelle Lujan Grisham are the original cosponsors.