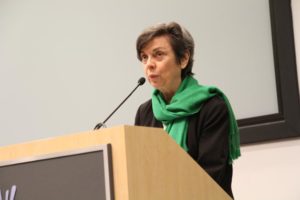 This week, we asked the candidates for Arlington County Board to write a sub-750 word essay describing why Arlington residents should vote for them in the special election on April 8.

Dear ARLnow.com and Citizens of Arlington:  I am Janet Murphy the Independent Green Party Candidate for Arlington County Board.  I am running because we need more trains, and less traffic and that means Columbia Pike rail.  Rail pays for itself. This weeks’ Columbia Pike Rail study shows it will bring $4.4 billion of economic growth. Rail saves lives. Rail creates jobs, increases the value of our homes, businesses, and community. Rail grows revenue for our schools, police, and fire departments, and affordable housing. Let Arlington be the most pedestrian, bike, and rail friendly community in the nation. We call for a new passenger rail tunnel under the Potomac to solve the problem of the “Orange Crush” on Metrorail, and expanding Metrorail service to South Arlington with a new underground Metrorail line

Independent Green Party stands for “More Candidates, Less Apathy” and has put more third party candidates on the ballot in Virginia than any other party in the last 100 years.  Independent Green party salutes Giant Food which deserves our communities praise and support.

Pursue fiscal responsibility and social and economic justice with creating revenue by installing solar panels, and geothermal heating and cooling in all our public buildings. This saves Arlington taxpayers money.  Renewable – sustainable energy creates jobs that grow revenue for the county.  Solar, Geothermal, and weatherization are vital investments in our community. Janet Murphy will protect Arlington’s AAA bond rating.  Increase Arlington Based Businesses by 35% with innovation and green initiatives.

Carve out more open space and create new open space recreational opportunities, parks and pedestrian esplanades that provide community gathering place for Arlingtonians.  Let’s go down to the river and build a boat house or otherwise create access to nature there.  Plastic bags pollute, are not biodegradable, and damage our environment. We need to charge the fully loaded cost of plastic bags to Arlington’s environment. Participate fully in our clean water and air.

We need an energy self sufficient Arlington with Solar panels on every roof. We need conservation, weatherization, geothermal heating and cooling in every building. We need local renewable energy tax credits, or grants that match the 30 percent federal tax credits.  This encourages every Arlington home, and business to go Green. Renewable energy is a winner for Arlington and Arlingtonians  Our former Indy Green Party state chair installed geothermal heating and cooling in his Virginia house, and solar panels on his roof. The first year the house produced ten times the energy it consumed so it is a “Plus House”. Sell the energy back to the power company. Every house in Arlington could be a Green Energy Plus House. Instead of paying Dominion Power, they pay you for your renewable energy.

I am currently employed at a hotel in Arlington.  Formerly I was a software professional in Virginia in financial, environmental, entertainment and defense computer systems; Real Estate Agent VA, DC and MD; property manager; substitute teacher at all levels.  I was a Field Interviewer for 2012 Commercial Building Energy Consumption Study (CBECS) for Department of Energy through Westat, Inc.

I support social justice and all environmental wisdom that is available.  Solar and wind energy, recycling, innovation will cut down usage of water and electricity.