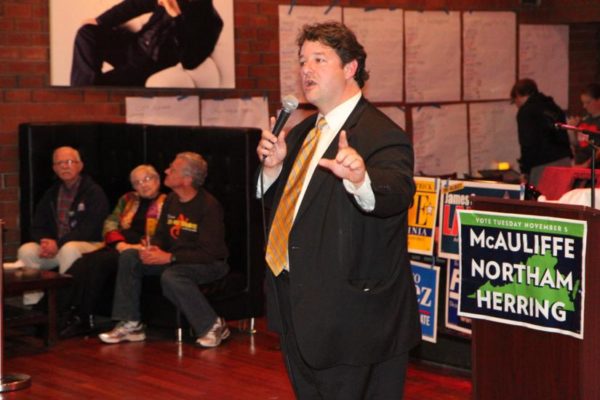 Lopez was one of nearly a dozen candidates in the race to replace the retiring Rep. Jim Moran (D-Va.) His campaign issued the following press release today.

Thanking supporters and pledging to continue his work to expand opportunity, Delegate Alfonso Lopez announced today the end of his campaign for Congress:

“I got into this race because even though on paper the economy is doing well, too many people are still struggling to make ends meet. Everyone deserves the opportunity to build a better future.

I am proud of how my campaign resonated with many voters in the Eighth District, especially new Americans, and that we assembled a coalition of many generous supporters. However, after we closed the fundraising quarter, I took the time to evaluate, with my team, the position of my campaign. It is clear to me that I do not have the resources necessary to run the campaign we wanted and that the people of the Eighth District deserved. With that in mind, I do not want to ask my supporters to continue to make the sacrifices of time, treasure and talent that they have so generously made thus far.

The voters of the Eighth District have many qualified and talented candidates to choose from on June 10 — many of whom I know well. I am confident that our next representative will fight for the progressive values of Northern Virginia.”

Alfonso Lopez has been a leader for environmentalists, gun safety advocates, and for new Americans in Richmond and during this campaign for the 8th Congressional District. I want to publicly congratulate him for running a strong campaign. I’ve seen Alfonso’s tenacity when we served together in Richmond, and we are lucky to have him as part of the Arlington County delegation. Alfonso has a bright future in politics, and I look forward to continuing to work with him in the future.