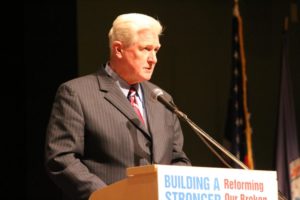 It may not be a popular message at a time when Congress’ approval rate is hovering around 13 percent, but Moran says the $174,000 salary for members of Congress isn’t enough to allow them to “live decently in Washington,” according to CQ Roll Call.

“I understand that it’s widely felt that they underperform, but the fact is that this is the board of directors for the largest economic entity in the world,” Moran told Roll Call.