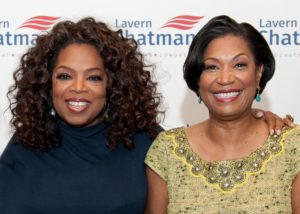 The event was held at the Crystal Gateway Marriott at 1700 Jefferson Davis Highway in Crystal City. Tickets for the fundraiser started at $150. At the high end, a $2,600 donation to the campaign came with reserved seating, admission to a VIP reception and a photo with Winfrey.

The fundraiser was closed to the press. The Chatman campaign issued a photo (above) and the following press release following the event.

Chatman has run effective nonprofit programs and organizations. She is the former CEO of the Northern Virginia Urban League, she founded the Grandfathers Group mentoring program for at-risk young boys, and co-founded the Nova Coalition an organization focused on increasing voter participation, voter restoration, and civic engagement. Personally, Chatman has a group of 15 young women she mentors called the “Fab 15,” and all 15 women attended.

“I will continue to be a champion for Virginia women,” Chatman said. “I am pro pay equity, pro-choice and pro women’s health. I have been in the trenches working with and mentoring young women and girls and I want to keep making a difference for my community in Congress.”

Chatman serves as a “host parent” for one of the graduates of the Oprah Winfrey Leadership Academy for Girls – South Africa while the student is studying in the United States. Philanthropist and global media leader Oprah Winfrey appeared at a campaign in support of her friend.

“Stedman and I came here tonight to support Lavern Chatman,” said Oprah Winfrey. “I’ve seen how Lavern embraced with her whole heart being a host mom to one of my girls, who recently graduated from the Oprah Winfrey Leadership Academy in South Africa. Lavern makes people feel like they matter, and I see that Lavern is happiest when she is serving others.”

“This was a great event for our campaign and to advance the conversation about what we can do to champion issues that impact women and girls in Virginia,” Chatman said. “Oprah and I share a strong commitment to making a difference for future generations.”