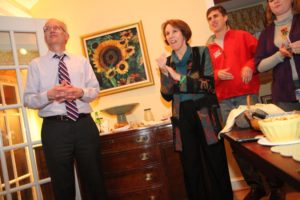 As the dust settles from Republican-backed independent John Vihstadt’s victory in the Arlington County Board special election last night, those in and around Arlington politics are surveying what could be a new political landscape.

Vihstadt won by a significant margin — 57 percent to Democrat Alan Howze’s 41 percent — in a special election that saw an unofficial tally of 22,209 votes. Democrats saw the result partly as a result of not enough voter turnout, while Vihstadt’s supporters — Republicans, Democrats, Greens and independents among them — viewed the election as a referendum of County Board policy.

“John’s overwhelming victory tonight is a testament to the growing number of Arlingtonians who are tired of a County Board that dictates its own priorities instead of listening to the voices and concerns of the community,” the Arlington County Republican Committee, said in a press release.

“Despite attempts to nationalize the issues in this race, the principles of fiscal responsibility and local project prioritization won out — and with a 15-point lead,” Arlington-Falls Church Young Republicans President Matt Hurtt said in a press release. “John is perfect for the job, and will bring balance to an overwhelmingly Democrat-controlled county government.”

Board member Mary Hynes focused on the work the Board has to do — including pass a budget later this month — with its newest member, who’s expected to be sworn in as soon as the election results are certified.

“The Board has a lot on its plate this month — budget being the first among many right now,” Hynes told ARLnow.com in an email. “It’s hard to come in at the end of a multi-month process like the budget. I know Board members and staff will do their best to answer any questions John may have as we move to adopt the budget on April 22.”

Many observers viewed this special election as centered primarily around the planned streetcar from Fairfax County on Columbia Pike to Pentagon City and Crystal City. Arlington Streetcar Now congratulated Vihstadt on his victory, but reiterated its beliefs that the streetcar would be better for Arlington than the enhanced bus service Vihstadt supports.

“Mr. Vihstadt’s election does not change any of the facts that have led the Arlington County Board to conclude on numerous occasions that the streetcar system is needed in Arlington and will provide tremendous benefits both for the neighborhoods directly served and for Arlington as a whole,” the group said in a release.

One local political observer, who preferred to remain anonymous, said Vihstadt’s victory was attributable to strong fundraising efforts, his experience and his liberal position on social issues, among other factors. The observer also said Democrats may have been distracted by the June primary in the 8th District congressional race.

“I think the thing to watch will be the CIP, due out soon,” the observer said. “Will there be a financing plan finally put forth for the Pike streetcar? What will be proposed to do for the Aquatics Center? Garvey and Vihstadt have common ground here — what will the other three do?”

Howze will again run against Vihstadt in November, when the general election for the retiring Rep. Jim Moran’s House of Representative seat and Sen. Mark Warner’s (D) Senate seat will take place.

END_OF_DOCUMENT_TOKEN_TO_BE_REPLACED

More Stories
Arlington Pet of the Week: Walt and TuckNOVA Legal Beat: Do I Make Too Much to Earn Overtime?