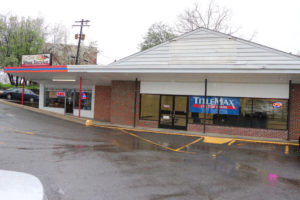 (Updated at 4:50 p.m.) The retail space at the corner of Lee Highway and N. George Mason Drive that once housed a 7-Eleven store is now a location for a car title loan company.

TitleMax, which lets individuals with poor credit borrow against the title of their automobile, moved into the space a few weeks ago, according to representatives of Virginia Hospital Center, which owns the building.

The 7-Eleven closed Oct. 21 of last year after the convenience store chain’s corporate arm declined to continue its month-to-month lease. In the months between 7-Eleven’s closing and TitleMax opening, Virginia Hospital Center Vice President and Chief Marketing Officer Adrian Stanton said there was little interest in the property.

“It’s an odd parcel in that it’s kind of at an angle,” Stanton told ARLnow.com. “It doesn’t allow for a lot of parking and the vehicular access is very limited. Retail operations are not interested in that space.”

Stanton said members of the nearby civic associations — the property is at the edges of the Leeway Overlee, John M. Langston and Tara-Leeway Heights neighborhoods — have been watching the property to see what business will go in there, and he plans to meet with representatives of some of the civic associations soon to explain why TitleMax moved in.

An ARLnow.com tipster questioned whether TitleMax’s location, on the edge of the Yorktown neighborhood, is “in keeping with the area.”

“TitleMax has locations around Northern Virginia in areas just like this,” Stanton said. “There’s obviously something TitleMax sees in the areas they place their services in.”