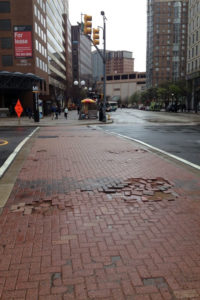 (Updated at 1:10 p.m.)The concrete, brick-like crosswalks that cross Fairfax Drive in Ballston and other main roads around Arlington are susceptible to disrepair and are more costly to fix than an average sidewalk.

The crosswalks, called “pavers,” were installed by the county on VDOT roads like Fairfax Drive, Lee Highway and Columbia Pike. They were built roughly 20 years ago as part of a county project to try to construct a brick-like crosswalk without material as fragile as the clay that bricks are made from.

“When brick sidewalks in old cities were in vogue, the industry developed concrete pavers as a flexible and durable surface for sidewalks that could adapt to tree roots without cracking and looked attractive in many areas,” county Department of Environmental Services spokeswoman Jennifer Heilman told ARLnow.com. “However, the heavy volumes of large vehicles such as what is typical of Fairfax Drive and most major arterials where Arlington has such crosswalks installed have made them very difficult to maintain as they’ve aged and become more prone to failure.”

Heilman said the crosswalks, like the one on N. Stuart Street crossing Fairfax Drive, captured by an ARLnow.com tipster in a state of disrepair on Tuesday, costs $20 per square foot to repair, which is four times the cost of repairing a standard concrete sidewalk.

Because of this winter’s extreme weather, the many crosswalks have been repaired with asphalt, like the ones at Lee Highway and N. Military Road and Columbia Pike at S. Walter Reed Drive. In high-density areas like Ballston that see a comparatively high volume of car and foot traffic over the crosswalks, developers and property owners contribute to the repair of the crosswalks through a county pedestrian maintenance program.

The crosswalk above, however, was repaired quickly by the county because it’s near a major transit hub. Heilman said there are 70 crosswalks with concrete pavers in the county at 35 intersections, but there are no plans to install any more in the future. Residents can report crosswalk failures to DES online.