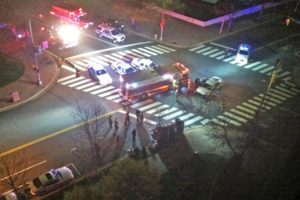 The crash happened around 3:00 a.m. Police say the officer was heading eastbound on Clarendon Blvd and was approaching a flashing yellow light at the intersection with N. Barton Street.

The resulting collision heavily damaged the front of the officer’s cruiser and caused the Jeep to flip on its side. The officer suffered minor injuries but did not need to go to the hospital. No other injuries were reported.

The driver of the Jeep was issued a ticket for a red light violation and was released, Sternbeck said.