On Monday, 102 runners from Arlington crossed the finish line at the Boston Marathon.

It was the first running of what many view as the world’s premier distance race since last year’s race was marred by the bombings that killed three and left hundreds injured.

Michael Wardian was the top finisher from Arlington, finishing in 2:23:32, good for third in the 40-44-year-old men’s division and 44th overall. Wardian, who turned 40 on April 12, won the North Pole marathon by nearly an hour less than two weeks ago and completed two other races — the GW Parkway 10 Miler and a 5K — between then and Monday. 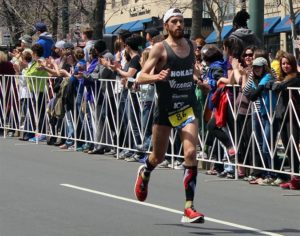 Wardian is an elite runner who runs dozens of races each year, but he said this year’s Boston Marathon was unique — the excitement level among the spectators was off the charts.

“People are screaming and the energy is so amazing,” he said. “For me it was super emotional coming down the final stretch and crossing the finish line. I couldn’t ask for anything more. It was such a special day and a great day to be a runner.”

“The whole reason I got into running 20 years ago was to get into the Boston Marathon,” he said. “It’s an honor to just be a part of it.”

Arlington’s top female finisher was Clarendon resident Kayley Byrne, 26, who finished in 3:09:05, putting her in 322nd among all women and 267th in her division. 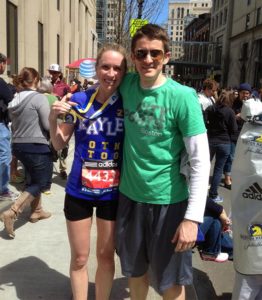 Byrne, a William and Mary alum who’s getting married in August, ran the marathon for the third time in a row — and for the second time with her mother, Carol. The two ran the Boston Marathon last year and Carol finished just 7 minutes before the bombs went off. Carol was uninjured, but shaken up.

Afterward, Byrne recalls watching the news coverage in their hotel room, stunned at how such a joyous event had turned so tragic so quickly. Then they made a pledge.

“There were people lining the course the entire way,” she told ARLnow.com. “Everyone was wearing Boston Strong shirts. It wasn’t so much about the race but a celebration of Boston and of running. There was a huge sense of community throughout the entire race and the entire weekend.”

Wardian’s next race will be the picturesque Big Sur marathon in California on Sunday. Byrne said she’s “feeling pretty beat up today,” but is looking forward to some day competing in the two World Marathon Majors she has yet to run, London and Berlin.

After the jump, in order of finish, are Arlington’s top 20 finishers in Boston from Monday.