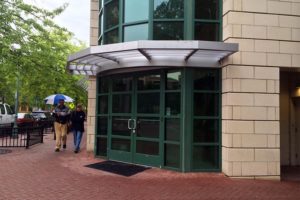 The former Caribou Coffee at 4115 Campbell Avenue in Shirlington is closed and is expected to reopen as a Peet’s Coffee and Tea next month.

Construction was being performed on the interior of the store today. That construction is expected to wrap up and the new Peet’s coffee shop is expected to open “in approximately 6 weeks,” according to Molly Hippolitus, a spokeswoman for the Village at Shirlington shopping center.

Minneapolis-based Caribou announced last year that it would be closing about half of its stores and converting the others to the California-based Peet’s brand.

The former Caribou location in Crystal City was originally expected to become a Peet’s store, but is instead becoming a new We, the Pizza location. The pizza shop from celebrity chef Spike Mendelsohn is expected to open any day now.